Home › Alumni in the News 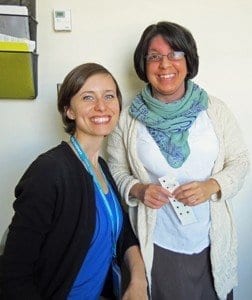 Our alumni often make the news, but we’ve been seeing more stories than usual recently. In case you missed them elsewhere on the web or television–

1) Jaime Ralston-Wilson, who played a major part in the development of one of the first full-time in-patient acupuncture programs in a hospital in the US, demonstrated acupuncture for KING 5 in western Washington and was interviewed for an article by Seattle Children’s Hospital.

“In inpatient settings, patients are so often at the mercy of what needs to be done, but with acupuncture, patients and families can be in control of their care,” says Ralston-Wilson. “If they want to think about it and try one needle, they can try one needle. If they want us to place a needle in our own arms, we’re happy to do that so they can see what it looks like.” 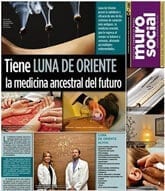 2) Marta Briseno has set up a clinic in Guadalajara, Mexico. An article on her practice and the field in general was published in the most widely-read newspaper in the city.

Marta says that “the clinic, Luna de Oriente, has been open since the second week of November, 2014, and it has been a great success so far.

“People are very interested in Oriental Medicine and they have welcomed us very nicely. We have 4 treatment rooms and are starting to get quite busy, we feel proud and very grateful to PCOM.”

3) Daniel Hsu, founder of New York AcuHealth Acupuncture, demonstrated cupping and acupuncture on national television on Live! With Kelly And Michael. Kelly Ripa was treated with facial acupuncture for congestion while Michael Strahan received cupping for his sore back.

The Daily Mail provided a playful review of the segment: “The amiable co-hosts of Live! With Kelly And Michael were feeling pretty good by the end of the show on Tuesday thanks to Dr. Daniel Hsu.

Kelly and Michael invited the world-famous doctor of acupuncture and herbal medicine to give them a sample of what treatments he performs.”