Home › Breaking the Mold by Following the Family Tradition 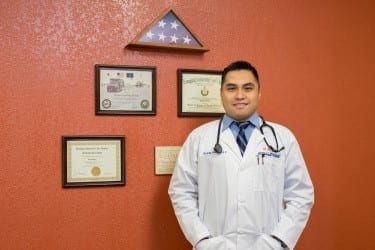 There was not a precise moment that Xiaolong Alcocer discovered acupuncture—because there was never a time when he wasn’t living and breathing it. Alcocer’s Chinese mother and Mexican father are both acupuncturists. In fact, four generations preceding Alococer on his mother’s side had treated acupuncture patients out of the family’s home in Mexico for years. From an early age, Alcocer was involved—at 7 and 8 years old, he was often called upon to translate words such as “back pain” and “neck” for his grandpa. As Alcocer grew older, moved to the United States, and began to pursue work in Western-style medicine, his intimate knowledge of this other approach to medical care stuck with him—and insistently shaped the healthcare practitioner he would become.

Alcocer graduated from high school in 2004, only a year after moving to the U.S. from Mexico. He started college without a clear conception of what he wanted to do—aside from a vague idea that he wanted to work in medicine. After a year, he knew college just wasn’t right for him at that time.

“I was tired of doing prerequisites of prerequisites,” he says, laughing. “I decided to join the U.S. Navy as a corps member to get myself into medicine.”

Navy medical corps members are enlisted medical personnel who offer healthcare services to sailors, Marines, and their families. They work in ship hospitals, naval hospitals, and the many places where Marines are deployed. Alcocer says he enjoyed this time, and that it very much helped develop his abilities to assess and treat patients according to Western medical standards.

At the same time, he adds, many of the injuries he treated in the Navy were chronic—the sort that are typically treated with medication or surgeries in the Western context. Acupuncture simply wasn’t available to patients with chronic pain, post-traumatic stress disorder, and anxiety.

This fact continued to nag at Alcocer when he left active duty and returned to the United States. Knowing that the GI Bill would cover most of the cost of college, he realized he was in a position to help do something about the inaccessibility of this alternative form of care. He would become the fifth generation in his family to practice acupuncture.

“I wanted to help people in another way,” he says, “not just through Western medicine and medications and things like that.”

Just after graduating from acupuncture school in 2012—before he could even take the board exam to validate his certification—Alcocer was deployed to Afghanistan. While there, he assisted a doctor, and together they treated patients suffering from chronic pain and anxiety with acupuncture. It was the beginning of a practice he would cultivate when he returned home.

Today, Alcocer’s private acupuncture practice, Alcocer Acupuncture Medical Clinic, treats a variety of patients, including veterans referred by the VA who are suffering from chronic pain. He takes heart in the fact that, by offering an alternative treatment, he is helping many patients avoid prescriptions for opioids and other painkillers.

“I think it’s the best alternative out there,” he says. “With acupuncture, most people can either reduce their dosage or stop taking their meds. Especially for veterans, I think that really helps if they’re having multiple issues—like pain, anxiety, and PTSD.”

In Alcocer’s family, the fifth-generation acupuncture practitioner may turn out to be the one who helps the practice spread the furthest.