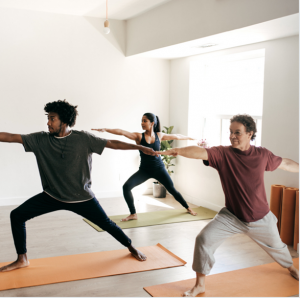 For many people today, the word “yoga” conjures up images of colorful mats, flexible bodies, and tight clothing. While these images may be great for posting on social media, they have little to do with actual yoga. In fact, yoga poses, or asanas as they are known in Sanskrit, are just a small part of the expansive system of yogic sciences that have been practiced for thousands of years. These sciences include the yamas and niyamas, asana, pranayama, pratyahara, dharana, dhyana, and samadhi. You may be wondering why these are sciences, and not simply practices: like other sciences, countless testing has led to a series of steps that when followed correctly produce a replicable result. In the case of yoga, the result is a state of enlightened living. In this state, not only does your own life benefit, but also those of all with whom you interact, both personally and professionally.

Outside of India and yoga teacher trainings, most people have no idea about these tremendously important practices. According to Patanjali, the yogic sage and author of The Yoga Sutras, the yamas and niyamas should be the first step on the yogic path—before even a single yoga pose is practiced.

Essentially, the yamas and niyamas are a yogic code of conduct that teach us how to interact with the world around us as well as the world within. The classical teachings of yoga suggest that before you attempt any yoga poses or meditative practices, you need to work on being a good person. The first step in this process are the yamas, and they can be thought of as a moral code: the way in which a yogi should interact with those around them.

Following the yamas, we find the niyamas. These can be thought of as a set of personal observances to prepare body, mind, and spirit for the more advanced practices that come next.

Of all the yogic sciences, this is the one that is best-known, and yet still misunderstood. Asanas are the yoga poses that you can find in studios, workshops, and social media posts around the planet. You may even be familiar with some of them: downward dog, cobra pose, triangle, shoulder stand, and so on. While these postures are a great way to get in shape, build stamina, and increase flexibility, their true purpose is to prepare the physical body and its energetic systems to sit comfortably in meditation. In fact, many of the early yoga postures taught in the ancient texts and schools of yoga were all seated meditation poses. It wasn’t until yoga made its way west in the early 19th century that asana became the primary focus of yoga practice. According to the yogic sage Patanjali, asana is just the third step within an eight-step system. It is a preparatory practice within yoga, and not yoga itself. Does that mean one should not practice asana? Of course not! It’s a wonderful practice, and even more so when done in conjunction with the other yogic sciences.

This is generally thought of as breath-work, and yet it is so much more. To understand it, we can look at the word itself. Prana can be translated as life force, and ayama means to draw out or extend. When put together, pranayama is about extending the life force, rather than just about breath control. Through increasing and enhancing the capacity to store prana, the yogi is able to experience and hold higher and higher states of consciousness as they move toward an enlightened state of being.

This little known yogic science is all about turning within. Rather than being bombarded with an overabundance of sensory input from the outside world, pratyahara guides the yogi to turn inward in preparation for the higher meditative practices. Pratyahara also calls on the yogi to be conscious and mindful of what sensory impressions are brought into the system, such as the kinds of film and tv shows that are watched, music listened to, and books read.

After practicing pratyahara, the yogi moves into the higher meditative sciences of yoga. Dharana, or single-pointed focus, guides the yogi’s mind and awareness to a specific object or idea to the exclusion of all else. Dhyana occurs when the yogi’s consciousness merges with the object of concentration, and finally, under the right circumstances, the yogi attains samadhi, the goal of yoga, which is union with the divine and all that is.

Bringing It All Together: Enlightened Living

Taken singularly, each of the yogic sciences can provide profound opportunities for growth and transformation. When done together, they can lead one into a state of enlightened living. As a practitioner in the field of health and wellness, knowing and practicing these yogic sciences also offers the opportunity to share them and their benefits with your clients and patients. What might that look like? The answer is different for everyone, but some common qualities would be greater awareness, deeper compassion, enhanced sensitivity, heightened intuition, and an ability to work on deeper levels of being. Not only will your life benefit from these yogic sciences; so too will those of all you encounter. This is the gift and promise of yoga, just waiting to be discovered. The only question that remains is: when will you begin?

Adam began his journey into yoga more than 20 years ago, and has been teaching it for nearly a decade. He is the Chair of the Department of Yogic Sciences at Pacific College in San Diego, and a Doctor of Acupuncture and Chinese Medicine. When he is not teaching, Adam enjoys serving tea ceremonies at The Retreat: Tea & Wellness in San Diego, CA. For more about Adam and his work visit www.theretreatsd.com. For more about Pacific College’s YTT-500 program visit www.pacificcollege.edu/yogateacher.