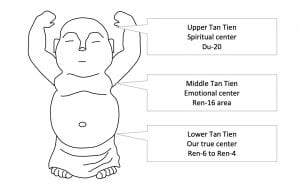 There are very few concepts in Chinese medicine that are more often mentioned than Tan Tien. Protecting and strengthening the Tan Tien is an important practice to maintain good health. But what exactly is Tan Tien and how can we assess it in the clinic? Let’s break it down.

There are three energy centers that make up the body: upper, middle, and lower. Most often these are described as “upper Tan Tien” or spiritual center, “middle Tan Tien” or emotional center, and “lower center”, known as the “true Tan Tien”.

Each of the three Tan Tien areas has a specific role and location but they are not independent of one another. One way to understand this relationship is to examine the design of ancient imperial grounds, like those of the Forbidden City.

The placement of the Emperor’s Palace within the Imperial city is very strategic: it is always in the north because the North Star is the symbol that represents him. In the same way that ancient travelers relied on the North Star for navigation, the role of the Emperor is defined: he serves as the example for the city and its people – you look to him to understand and navigate your way of life.

Given the significance and importance of the Emperor’s role, it’s no wonder that there were several structures built to guard and protect the Emperor’s palace, including expansive grounds and a high perimeter wall with guards surrounding the palace. Similarly, in the body, the three Tan Tien regions play that protective role.

The North Star is also a symbolic place of the Emperor’s seat.

The gate to the palace was always placed in the south so that the North Star was behind the throne – he always had to face south when seated.

Multiple layers of protection stand between the external world and the Emperor. Most notably, the Guardsmen at the peripheral wall represent the key observers of what is happening: they keep a watchful eye on the grounds and the Emperor. 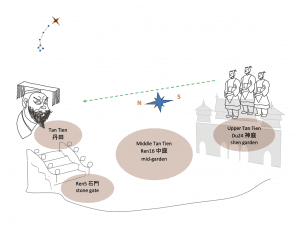 Clinical application of these concepts:

The importance of Tan Tien in general is established in the classics of Chinese medicine, specifically chapter eight of the Nan Ching, which lays out a case for this energy center as the very root of a person. Thanks to this chapter, we understand that a strong Tan Tien is responsible for the well-being of all meridians and organs, protects shen, and is thought to be the “gate” of inhalation and exhalation (a concept that is emphasized in all martial arts practices).

This is very similar to the role of the Emperor, who sets the course for the well-being of the entire community. The health and safety of this leader are of utmost importance and the entire structure of the place in which he resides is designed with protection in mind.

Points along the Ren channel and connection to Tan Tien:

It’s important to point out that, in ancient times and in the context of the Forbidden City, the character we currently translate as “garden” had a very different meaning. At the time, it was used to refer to a defensive or protective structure and therefore differed greatly from what we picture today when we hear the word. With that in mind, consider that the upper Tan Tien point, Du-24, might represent an army of guardsmen perched on top of a high perimeter wall. Their eyes are toward the Emperor and their role is protection – not unlike the modern-day secret service or similar protective details.

The “middle garden” is a symbolic place of a second line of defense and is under the watchful eye of these guardsmen as well.

Needling Du-24* has a positive effect on releasing the following reflexes1:

*Du-24 should be needled away from the face and in the exact location that releases pressure pain in the above-mentioned areas.

Simply put, Du-24 is the central command that allows all the protective forces around the Emperor to align and to function at their optimal level so that the Emperor can remain strong, healthy and calm.

Finally, there is an interesting overlap between the ancient concept of the word “garden” as a protective force for the Tan Tien and the modern Western understanding of the function of the great omentum. In addition to being the largest organ in the body, the great omentum plays an important role in protecting the abdominal cavity from invaders and infections.

“Since the beginning of the twentieth century, abdominal infection control and wound isolation were well-recognized functions of the omentum. The British surgeon Rutherford Morrison in his publication ‘Introduction to Surgery’ (1910) called it ‘the policeman of the abdomen’.”1

This is an overlap that is worth exploring further in the clinical setting.

Kiiko Matsumoto is internationally known for her scholarly work on acupuncture and the interpretation of Chinese Classic texts. She is best known for her ability to integrate the work of very important Japanese Masters including Master Nagano, Master Kawaii, and Dr. Manaka. Her clinical practice is based in Newton Highlands, MA but she teaches all over the world. Ms. Matsumoto has been collaborating with Monika Kobylecka, LAc to create teaching materials which describes her latest research and work. In addition to this collaboration, Ms. Kobylecka practices Kiiko Matsumoto Style (KMS) acupuncture at Children’s Hospital Los Angeles (CHLA) and teaches hands-on introductory classes in KMS.