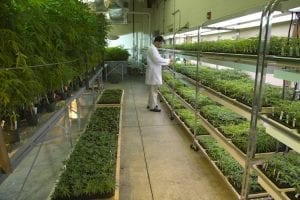 In 1937, all cannabis-related drug production and prescription means in the United States ceased with the passage of the Marijuana Tax Act. Scientists, researchers, pharmaceutical companies, and physicians were no longer able to use cannabis. Why was cannabis unusable? Not because cannabis was made illegal. Note that Henry Anslinger, head of the Federal Bureau of Narcotics, didn’t petition Congress to make it illegal in 1937; the bill passed by Congress was a tax act. In 1937, the Marijuana Tax Act imposed a $100 per ounce tax. This is the equivalent to over $1,400 per ounce in today’s dollars! This was a gross abuse of public stewardship. If you know your history, you know that the Great Depression began in 1929 with the historical stock market crash, and Americans, including scientists, researchers, pharmaceutical companies, and physicians, did not have the financial means to spend that much money on cannabis. Especially not when there were other, cheaper, non-taxed drugs available, like morphine and cocaine.

The United States became a cannabis desert. Did this prevent the rest of the world from continuing its investigation into the plant known as Cannabis sativa? Fortunately, scientists and researchers in other parts of the world paid no mind to the financial misconduct and Reefer Madness that was occurring in the US. We owe many thanks to these persevering individuals who recognized that the plant contained mysterious, yet valuable, components.

In 1933, Dr. Robert Sidney Cahn, a British chemist, fellow of the Royal Institute of Chemistry, and later editor of the Journal of the Chemical Society, isolated pure cannabinol (CBN), one of the cannabinoids found in fresh cannabis plants. Eighty-six years ago, cannabinol was discovered and is just now being investigated for all its medicinal properties, which include pain relief, relaxation, anti-inflammatory, antibacterial, bone growth, anticonvulsant, and antiproliferative (cancer-killing). But I’m getting ahead of myself. Over 80 years ago, CBN was isolated then forgotten, as the world began to focus on synthetically-created pharmaceutical drugs. Cannabis was tossed out with the bathwater, and we are only now returning to it as we discover all the health benefits it provides.

Getting back to cannabis’s story, Dr. Roger Adams, a Harvard-educated organic chemist and head of the chemistry department at the University of Illinois at Urbana-Champaign in the US, along with Dr. Alexander Todd, a British biochemist who was later awarded the Nobel Prize for Chemistry, continued the quest for cannabis’s active components. Between 1940 to 1946 (at the time the world was at war against Germany), these determined scientists investigated the chemical properties of cannabis in order to identify its structure, elements, and activity in vitro, meaning in the laboratory test tube, and in vivo, meaning in live specimens. Dogs were used to test the effects of cannabis, and after administering cannabis to them, they had difficulty walking. This evidence led Drs. Adams and Todd to conclude that cannabis affected the central nervous system (CNS), which led to the first discovery of the psychoactive component in cannabis, delta-6a,10a-tetrahydrocannabinol (THC).

Drs. Adams and Todd also isolated another cannabinoid during their exhaustive cannabis research and named it cannabidiol (CBD). Interest in cannabidiol has recently exploded, and while THC is psychoactive and affects the CNS in many ways, CBD has no psychoactive effects. One of the major health benefits of CBD is as an anti-inflammatory, but the health benefits of CBD are so vast that I will reserve this topic for its own detailed article in the future. I promise. But over 70 years ago, CBD was discovered, which begs the question, if CBN and CBD research had been permitted in the US between 1937 and now, would our country have the health crisis we are currently experiencing?

Let’s return to cannabis’s journey. By 1960, Dr. Robert de Ropp, an English biochemist and researcher, had spent most of his professional and academic life researching plant physiology. He emigrated to the US and conducted research at the Rockerfeller Institute, investigating plants as drugs that affected behavior, and even wrote a book on plant-derived psychoactive substances (it’s still available at Amazon in antiquarian form). It was in 1960 that Dr. de Ropp isolated what was believed to be the first pure psychoactive component of cannabis, delta-9-tetrahydrocannabinol (THC). For whatever reason, Dr. de Ropp’s research was not continued. The door closed on cannabis once again.

Cannabis Sets Up a New Home in Israel

Enter Dr. Yeheil Gaoni and Dr. Raphael Mechoulam. If you know anything about the history of cannabis, you know that these two scientists are among the main reasons cannabis has reclaimed its superiority as a medicinal therapeutic. In 1964, Drs. Gaoni and Mechoulam, working in Israel, finally isolated the pure form of delta-9-THC. Not only did these organic chemists isolate the psychoactive component of cannabis, they were also able to synthesize, or create it. Dr. Mechoulam would go on to discover one of the most important biological finds of this century. But again, I will reserve Dr. Mechoulam’s story for a future article. Dr. Mechoulam plays an important starring role in the history of cannabis, so he will certainly appear in a later act. He remains active as a cannabis scientist, even though he is approaching age 90.

Cannabis the Criminal Returns to the US

As we return back to the US cannabis desert in 1971, we find that politics and Reefer Madness continued to escalate as cannabis was listed as a Schedule I drug – meaning it had no medicinal value and shared this category with heroin – with the creation of the Controlled Substances Act. Morphine, the narcotic that had taken the place of cannabis when it was taxed into oblivion in 1937, was categorized as a Schedule II narcotic, meaning that it had high potential for abuse. At least they got morphine’s Schedule category right. While the rest of the world was discovering cannabis’s unique health properties, Americans were becoming ever more cannabis-deficient. And after almost 50 years of using morphine and its derivatives exclusively for the treatment of pain, our country is in the midst of an opioid crisis. (Note to Self: Cannabis can be used to replace or reduce opioids, and even help patients with their opioid addiction. I see another cannabis story on the horizon).

With the passage of the Controlled Substances Act, cannabis in the US was prohibited in any form, as it had a high potential for abuse (that joke never gets old) and it had no medicinal value at all, according to President Nixon, who signed the act into law in 1971. Did that stop Dr. Frederick Klein and his fellow researchers at the University of California at Berkeley from investigating cannabis? Not at all. Dr. Klein and his colleagues discovered four alkaloids in cannabis in 1971. These alkaloids were named cannabimines, and although researchers have not yet discovered all the physiological activity related to these elements, these four cannabimines are among over 400 elements in cannabis that are being investigated for their medicinal properties. Time will tell what medicinal uses these elements may possess.

The first fully identified cannabis alkaloid was discovered in 1975 by Dr. Hermann Lotter and his colleagues at the University of Mississippi. This element was named cannnabisativine and was discovered in the roots of a Mexican cannabis variant. Oh my, those Mexicans who brought marijuana with them in the 1930s really knew what they were doing, because cannabisativine has been found to treat inflammation and joint pain (no pun intended). Research continues on this cannabis compound, and as one of the many parts of cannabis, the roots are providing evidence that the entire plant is beneficial to human health.

To bring our story of cannabis back to the world, Dr. Mahmoud El Sohly and Dr. Carlton Turner, working at the University of Mississippi, further isolated another cannabis alkaloid using the same Mexican cannabis roots and named it anhydrocannabisativine. This research was offered to the world through a paper presented to the United Nations, as researchers from around the world began to collaborate on cannabis investigations.

Before we leave this chapter of cannabis history, astute readers might be asking themselves (or more likely, me), “Hey! How did US researchers obtain cannabis to study during the period of the US cannabis drought? Cannabis has been illegal for the past 80 years!”

First of all, good question. Cannabis IS still illegal at the Federal level and still categorized as a Schedule I drug with no medicinal value. This may (or will) change and already, two bills have been introduced at the first 2019 opening session of Congress, the Compassionate Access, Research Expansion, and Respect States (CARERS) Act (for more information on this bill, see https://tinyurl.com/y7cz3z25) and HR 171 (for more information on this bill, see https://tinyurl.com/y7hqg6px). But change is difficult and changing attitudes and beliefs is even more difficult. Over eight decades of Reefer Madness still resonates in much of our population.

Even though many states have legalized medicinal and/or adult-use, individuals who use cannabis either recreationally or medicinally run the risk of arrest and prosecution. So how DID these US researchers obtain cannabis to study before now? Let’s ask Dr. El Sohly, who was mentioned above as one of the scientists who discovered anhydrocannabisativine. Dr. El Sohly is the director of the University of Mississippi’s Marijuana Research Project. This research project was initiated in 1968 as a means to cultivate cannabis for research.

Wait, what? There has been a university research project dedicated to growing marijuana since 1968? The answer is yes. But that’s not all.

Dr. El Sohly’s Research Institute of Pharmaceutical Sciences grows cannabis for a very exclusive client, the United States Government. The UM School of Pharmacy’s National Center for Natural Products Research (NCNPR) studies all aspects of the Cannabis sativaplant and is funded by the National Institute of Mental Health (NIMH) and the National Institute on Drug Abuse (NIDA). This program is the only legal source of cannabis that can be used for medical research in the US, including FDA-approved clinical trials.

And the NCNPR grows a lot of cannabis. In 2015, the US Government awarded the University of Mississippi $68.8 million to grow and analyze cannabis. As the sole producer of federally legal cannabis, UM grows over 30,000 cannabis plants per year. All research conducted by scientists in the US has used US Government cannabis, grown at the NCNPR at the University of Mississippi. Uncle Sam is in the cannabis business and has been for over five decades. Our tax dollars are used in part to fund cannabis cultivation for cannabis research. Our tax dollars are also by US agencies such as the Department of Health and Human Services, the National Institutes of Health, and the National Institute for Drug Abuse to research cannabis and its effects on the health of humans. No matter if you are for or against cannabis, the taxes you pay may be earmarked for its growth and research. Dr. El Sohly’s farm provided all the cannabis for researchers to discover cannabimines, cannabisativine, and anhydrocannabisativine. But what I have to share next with you about the US Government’s relationship with cannabis will really astound you.

Stay tuned for how cannabis still isn’t medicine, but it is, according to the US Department of Health and Human Services. Cannabis has had a tumultuous, bumpy, confusing ride over the past 80 years, but it’s not finished its journey just yet.

Online Bachelor of Science in Nursing – RN to BSN

R. S. Cahn. (1933). Cannabis indica resin, part IV. The synthesis of some 2:2-dimethyldibenzopyrans, and confirmation of the structure of cannabidiol. Journal of the Chemical Society, 1400-1405.

E. Konieczny with L. Wilson. (2018). Healing with CBD: How Cannabidiol Can Transform Your Health Without the High. Berkeley, VA: Ulysses Press.

Y. Ganoi and R. Mechoulam. (1964). Isolation, structure and partial synthesis of an active constituent in hashish. Journal of the American Chemical Society, 86, 1646-1647.