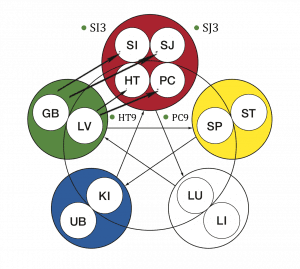 In prior articles, this author has detailed the importance of diagnosing a patient’s primary elemental imbalance (aka Causative Factor or “CF”) via odor, color, sound, and emotion. Once we have cleared any and all of the energetic blocks to acupuncture treatment strategies efficacy, in this system of medicine, we turn our attention to supporting, balancing, and harmonizing the CF, as it is the source of the symptoms that invariably spread throughout the entire system and manifest at the levels of body, mind, and spirit. So, when we speak of supporting the CF, what do we mean?

In this author’s last article in Oriental Medicine (Summer 2018), the use of Command points was covered and, more specifically, Source points, Tonification points, and Horary points. This article will focus on two additional types of command points: Sedation points and Junction (aka Luo/Connecting) points.

Command points are the “bread and butter” of this system of medicine. While any point may be called upon (as needed) for its spiritual connotation, location, or function, Command points are often the first points we use in the early stages of treatment, as they are the safest points (with the lowest risk of over-tonifying or over-sedating) and provide the clearest feedback as to whether our diagnosis of the patient’s CF is correct. Placing a needle in any point will have an effect on the whole of a person’s energy, so treating the meridians of the CF without the input and reactions of treating other elements and meridians will help us know what actually caused the change. Command points are found distal to the elbow or knee flexure and include Source points, Element points (including Tonification points, Sedation points, and Horary points), and Junction points.

Assuming the patient is not blocked, when we treat the correct CF, we will get an immediate and palpable pulse change on all 12 pulses, as well as a change in the intensity of the patient’s odor, color, sound, and emotion. Sometimes, the pulse change will be the more dramatic; sometimes the sensory indicators will register the more dramatic change; and sometimes both will be dramatic. With this feedback, we will know that the change was the result of having treated the primary core imbalance—the source of the problem. If we do not get this result, it may well indicate that our diagnosis is incorrect.

The Tonification point of a meridian is the point that corresponds to its Mother—the preceding Element on the Sheng or “Creative” cycle. We observe that, on this cycle, Wood is the Mother of Fire. It creates, promotes, and feeds Fire just as a Mother would feed her child. Thus, in the Element Fire, the Tonification point of any of its Officials (organs/functions) is the Wood point (HT 9, SI 3, PC 9, SJ 3), corresponding to its Mother Element. 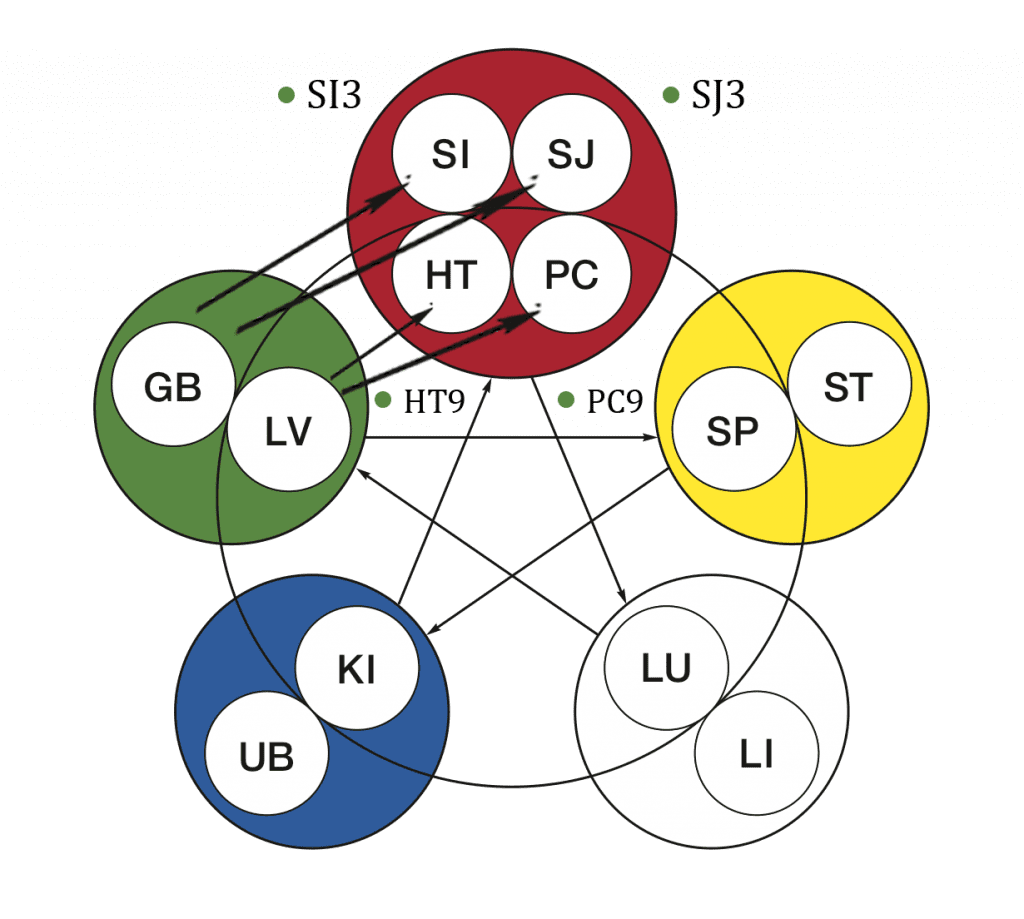 In Earth, the Tonification point is the Fire point (ST 41, SP 2), and so on around the cycle.

These points can only be used as Tonification points when, by pulse diagnosis, it is determined that there is more energy in the Mother than in the child. Metaphorically speaking, there has to be more milk in the Mother’s breasts than in the child’s tummy. Used as such, tonifying these points affects a simple transfer of energy from the Mother to the child, as indicated in the above diagram. These points pull the excess to the child from its Mother. If successful, not only will Mother and child be balanced, but all Officials will feel the relief and will manifest a change for the better. In the vast majority of cases, this strategy will be successful and the pulse change will confirm it. However, in some cases, the Mother is stubborn, unwilling or unable to freely give her excess to her child. In such cases, Tonification points may not work, or not work well enough. The Mother is still holding on to the excess. Thus, we turn to Sedation points.

(NOTE: for a description of the needle techniques for tonification and sedation, see Oriental Medicine, Summer 2018)

Sedating these points relaxes the Mother, helping her to release the excess and drain it into the child. The energy knows where to go because sedating the Sedation point directs it to the child. For example, if a patient were a Water CF and the pulses indicated an excess in Metal (the Mother of Water), we would first try tonifying UB 67 and KI 7 (the Tonification points) to pull the excess from the Mother. If that was not sufficient and Metal was still holding excess, we would sedate LI 2 and LU 5, the Water points of Metal. This would be akin to getting behind the excess and pushing it into the child, as diagrammed below. 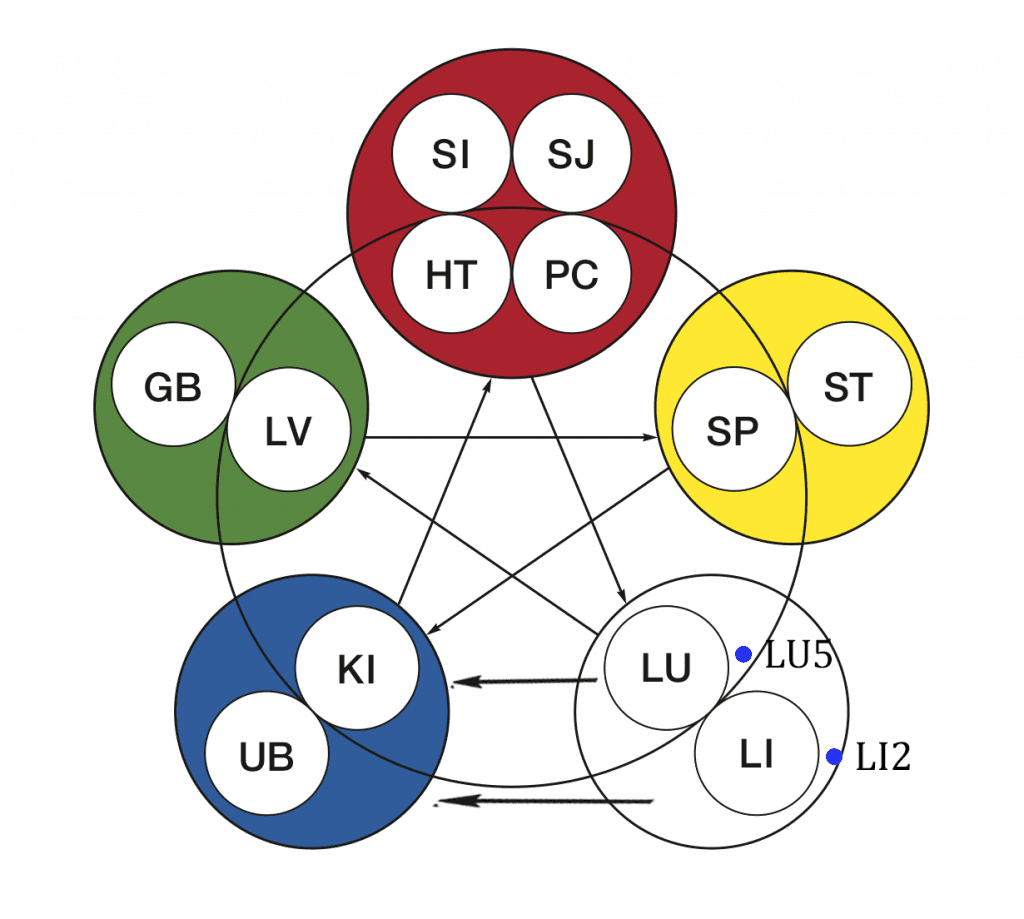 In another example, if the patient were a Metal CF and there was an excess in Earth (Mother of Metal), and if tonifying LI 11 and LU 9 (the Earth and Tonification points) was not successful in pulling the excess from the Mother, we would sedate ST 45 and SP 5 (the Metal points) to push the excess from Earth and drain it into Metal, as diagrammed below. 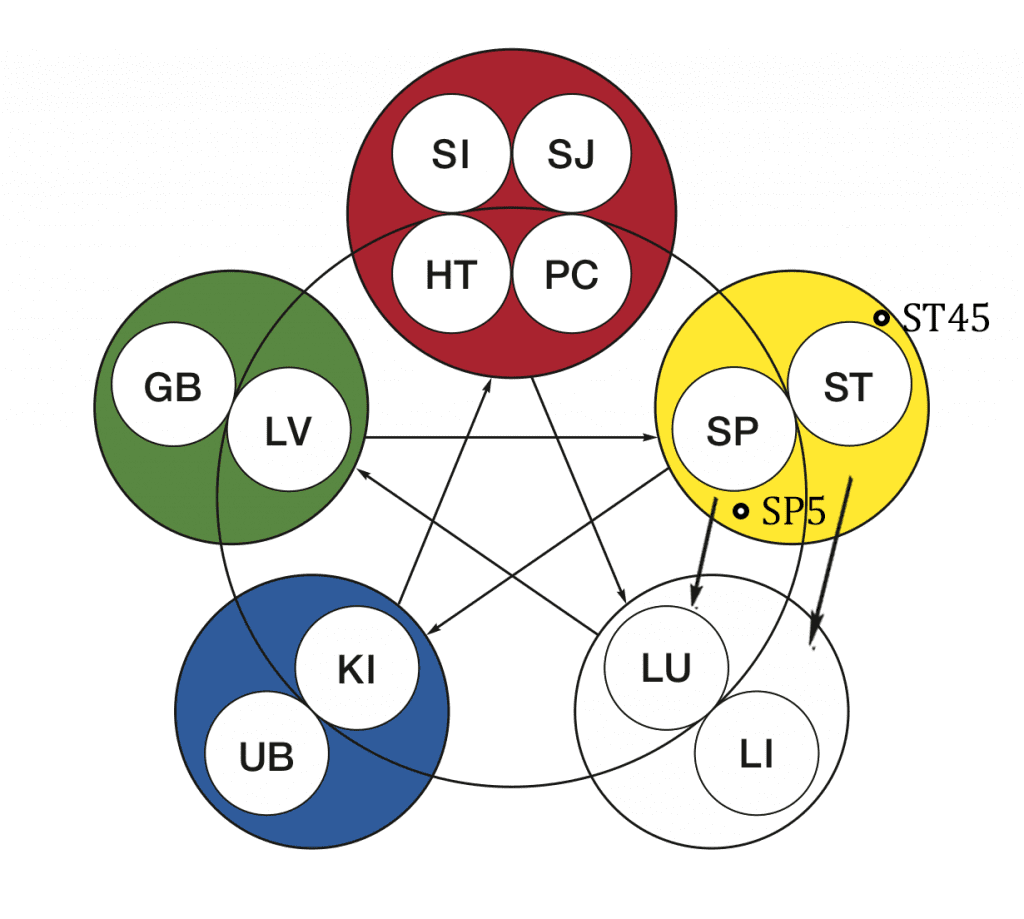 As in the previous example, we would retain these needles until the excess had drained and balance was achieved, determined by the pulse change.

Note that there are other uses of these points as acupuncture treatment strategies. For example, PC 7 (the Earth point) would be used as a Sedation point only if there were an excess in PC and a deficiency in SP, but it also could be used as a Source point, an Earth point, or for the spiritual connotation suggested by its name, Great Mound, all depending on the expressed need of the patient and the pulse picture. Energy understands intention and the response of a point does, in large part, depend on the intention of the practitioner. 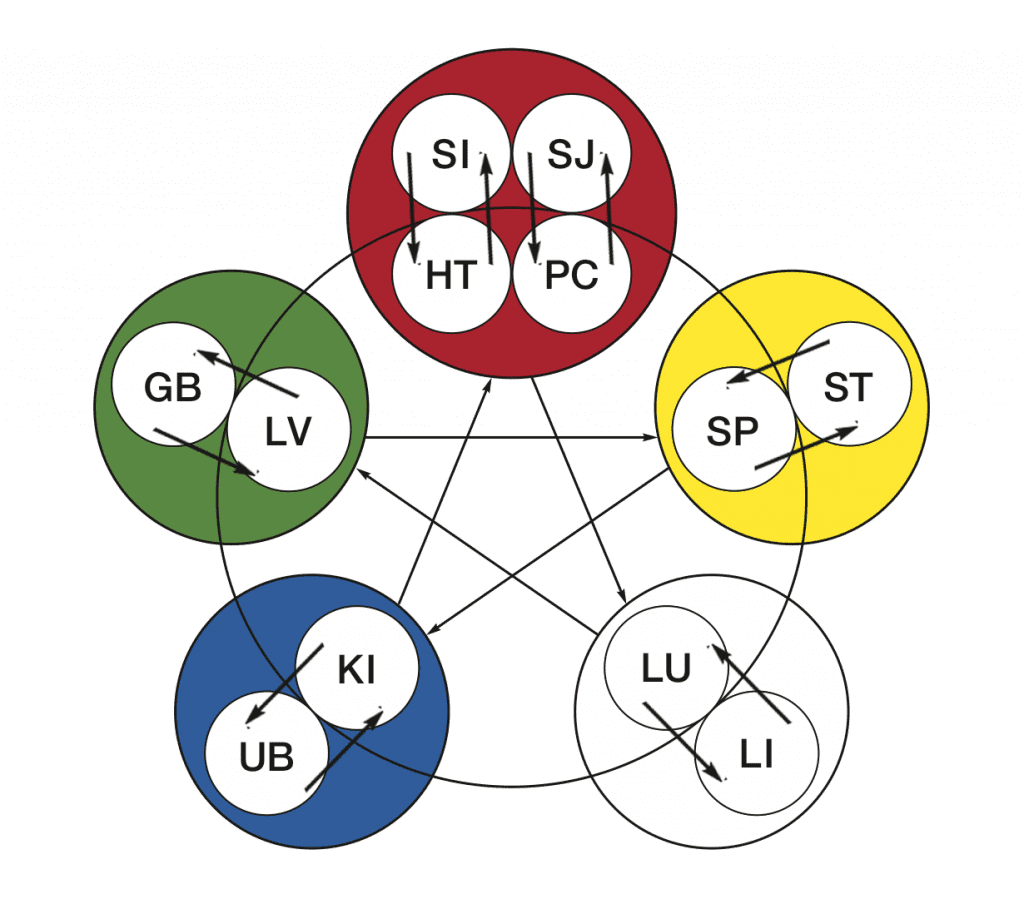 ­We can imagine the paired Officials as siblings. To maintain balance and harmony in the family, the children should share their toys and food, and receive equal love and attention. If there is a split between the two—one having more than the other—jealousy and resentment will result, and the harmony of the whole family will be disrupted.

In terms of the qi energy, we feel this split on the pulses of the paired Officials. One will have too much and will feel stronger to our touch, the other too little and will feel weaker. The result of such a split can be devastating to the energy of the whole of the body/mind/spirit. A split in an element will create imbalance in its child and likely be passed further along the Sheng Cycle and throughout the system. It is better that whatever amount of energy is present in an element is equally divided between the paired Officials. It is particularly important that any split in the CF be addressed, as balancing the CF will tend to balance out splits in other Elements.

To resolve such a split in an Element, we tonify the Junction point of the deficient Official. This is akin to opening a lock or valve on a waterway and is one of many effective acupuncture treatment strategies. If, on one side of the valve, there is excess water, and very little on the other, opening the valve will allow the excess to flow into the deficiency, resulting in an equal quantity of water on both sides.

For example, if we found by pulse diagnosis that there was a split within the Wood element wherein the predominantly yin Official, the liver, was deficient in relation to its brother, the predominantly yang Official, the gall bladder, we would tonify LIV 5, bilaterally, allowing the excess to flow from gall bladder to liver, creating balance and harmony between the two.

If the situation were reversed and liver had the excess, we would tonify GB 37, the Junction point of gall bladder, allowing the excess to flow from liver to gall bladder.

Professor Neil R. Gumenick is Founder and Director of the Institute of Classical Five-Element Acupuncture Inc., which offers training to acupuncturists, physicians, and students of Oriental Medicine in this profound system of body/mind/spirit medicine. He has maintained a private practice in Santa Monica, CA, since 1981 and is a professor at Yo San University. Neil holds three degrees and an advanced teaching credential from The College of Traditional Acupuncture (UK), awarded by the late Professor J.R. Worsley. Neil was recipient of the 2007 AAAOM Pioneers and Leaders in Acupuncture and Oriental Medicine Award, and is one of the world’s foremost practitioners, teachers, and writers on the subject of Classical Five-Element Acupuncture. 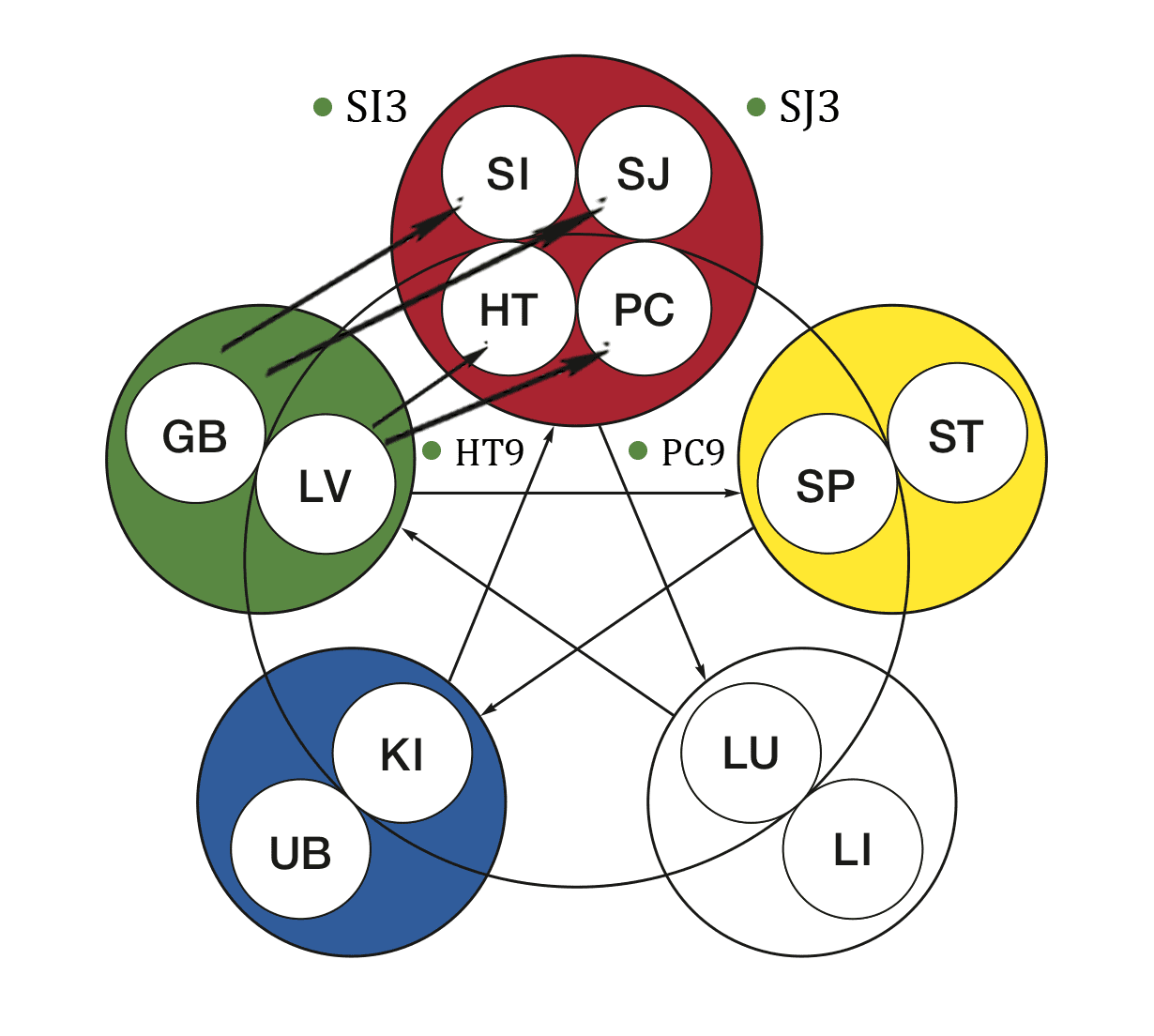 Article Name
Classical Five-Element Acupuncture Treatment Strategies
Description
Once we have cleared any and all of the energetic blocks to acupuncture treatment strategies efficacy, in this system of medicine, we turn our attention to supporting, balancing, and harmonizing the causitive factor.
Author
Neil R. Gumenick, LAc, MAc
Publisher Name
Pacific College of Health and Science
Publisher Logo