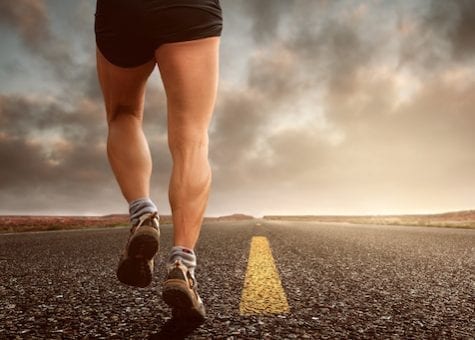 About five years ago, I traveled to Japan to participate in a five-day seminar that was to be given Dr. Toshikatsu Yamamoto, the developer of Yamamoto New Scalp Acupuncture (YNSA). At the time, I was also training to run a marathon. When training for a marathon, all workouts are important and missing one workout might affect my participation.

On the morning of the first day of the seminar, I decided to go for a 15- kilometer run along the shores and beachfront of Aoshima, the town where Dr. Yamamoto has his clinic and seminar. The area is breathtakingly beautiful, and I found myself concentrating on the landscape: the beautiful views of the water, the waves smashing on the rocks, the green palm trees. After about ten kilometers, I was so concentrated on the views that I did not concentrate on the road’s surface and did not see the pothole in the road. I stumbled into the pothole and severely twisted my left ankle. It was so severely twisted that I fell down, and when I tried to get up, I could not stand on my left foot. After about three minutes, I tried to stand again but was still unable to do so. A minute or so later, I started to walk slowly, limping on one foot, when a thought crossed my mind: if I continue to run, the pain will go away and the swelling will subside. I started to walk slowly, the walk turned into a slow run, and after about ten minutes, the pain was gone. Thinking back, that was a dumb thing to do: I should have just caught a taxi back to the hotel.

When I returned to the hotel and finished my stretches and showered, I rested on the bed, waiting to be picked up for the seminar. When the time came to get up, I looked over my ankle. It was very swollen, blue, and painful: I could not put any weight on my foot. I hopped on one foot down to the taxi, and from there we were taken to the seminar for the first day of training. When Dr. Yamamoto saw me, he asked me what happened and I told him the story. He offered to treat my ankle. I was very happy, excited that I would have the opportunity to be treated by Yamamoto. According to Dr. Yamamoto’s diagnosis, he needled the D basic point on the left side to affect the lower part of the body from the diaphragm down to the lower limbs. Then, he needled the I somatotope on the left side in the area that reflects the ankle; the I somatotope was developed from the I point over the past 7 years, is located on the scalp over the temporal muscle, and is a reflection of the whole body. By needling different areas on this somatotope, you affect that area of the body (see figure).

After he needled these points on the scalp, he kept on asking me to slowly move my ankle. I felt that it was moving more easily and it was less painful. He then needled the H basic point and asked me to try to walk on my foot. Although it was painful when I walked, the pain was a bit less and there was some slight improvement in the angles that I can turn my ankle. Next, he decided to try to treat the ankle by working on my wrist, but this time he used ASP needles and needled the area of my wrist that reflects the area of my ankle (very similar to working with the balance method of Dr. Tan). After needling this point, my ability to walk improved.

After Dr. Yamamoto needled my wrist and my scalp (the D and H points, and the region of my ankle on the I somatotope), he decided to needle two more points on my scalp: the first was the I somatotope in the area that reflects the cervical spine (this area is located between the tragus of the ear and the temporal mandibular joint). The second point he needled was the foot point, which is located on the zygoma. After needling this point, I could rotate my ankle with no pain and walk with a slight limp. In days to come, I realized that the cervical region of the I somatotope overlaps a point that is reflected on the gastrocnemius muscle (see figure). I frequently needle this point to treat heel spurs, ankle sprains, and plantar fasciitis.

About two hours after the treatment, with the needles still in my scalp and wrist, the pain in my ankle became more severe and the intensity shot up from a VAS scale of 2 to about 10. I started to feel that blood was pumping in my ankle and I had a throbbing feel in my ankle. The pain was so severe that I decided to pull out all the needles because I could not take the pain anymore. As I took out the needles, I felt the pain slowly subside. About three hours later, I suddenly realized that I did not feel any pain in the ankle and it seemed that the swelling was reduced. I was amazed by the results and overwhelmed by how quickly the swelling went down.

At the end of the day, when we were leaving for dinner, I suddenly noticed that I was walking with a slight limp. When I looked at my ankle, it seemed that there was less swelling. I was astonished that this had happened.

The next day, when I woke up, I could walk normally with no limp. Although the ankle was still a bit blue and bruised, I felt pain in my left ankle only when it was at certain angles. I also remember the other participants looking at my ankle and being amazed by the outcome of the treatment and the rapid response of my foot and ankle.

During the day, I mentioned to the other participants that I might go for a run the next day. They recommended that I should not, in order to rest my ankle. Since my thought was on the marathon, and every day that I don’t run would affect the training, I went for a run the next day. When I started the run, I felt a very slight pain which completely disappeared when I continued to run. When I finished the run, I felt no pain at all and I was walking and running normally, and without pain. The pain did not return.

I have related my personal experience on how YNSA affected me because I was so amazed with the result. This personal experience left me with an impression that I can treat any disorder and get fast results using this wonderful method. This experience also inspired me to dig deeper into YNSA, to improve my technique, and to understand how YNSA works and what other disorders it can treat. YNSA was originally develop for pain management, but as the years go by, I see it can be used to treat not only pain but also internal disorders such as those affecting the cardiovascular system, gastrointestinal system, endocrine system, allergies, skin, and others.

Over time, I have come to understand that the simplicity of the method is its greatness. YNSA is a very simple method to use and anyone can get fast results in the clinic with their patients. I believe that if more practitioners will use this method then more patients will benefit from it.

As for the marathon? I did not run it in the end because life is full of surprises… and there is always next time.