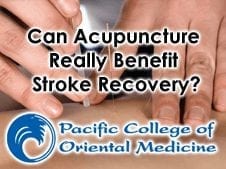 The World Health Organization estimates that 15 million individuals suffer from stroke annually worldwide, most of whom live in developed countries, where hypertension, hypercholesterolemia and cardiac diseases are prevalent. Stroke is the third leading cause of fatality and ranks highest as a cause of disability.1

Western medicine has made some advances in the treatment of strokes, including the use of Tissue Plasminogen Activator (tPA) and intracranial angioplasty. However, these procedures are not indicated for or accessible to all stroke patients. Despite receiving tPA in the recommended window, 58% of patients still die or end up with severe disabilities.2

Typical post-stroke care in the USA starts with seven days of hospital stay followed by one to two weeks of physical therapy, occupational therapy and speech therapy in a rehabilitation facility. After three or more weeks of outpatient rehabilitation, the treatment comes to an end, but the patient’s recovery is far from complete. In one study3 on ischemic stroke survivors who were at least 65 years of age, the following disabilities were observed six months after stroke:

Obviously, there is a lot of room for improvement in standard stroke protocol.

Many people have asked this question. Our answer is a definite “yes”, but recent western research and meta-analyses make the claim that there is no clear evidence for the additional value of acupuncture for post-stroke rehabilitation.4,5 Why is there a discrepancy? Both statements are valid. What is more accurate is that acupuncture can significantly benefit stroke patients if it is done right, but otherwise it is of little value. Our own experience with stroke patients over the years demonstrates that when applied correctly, acupuncture can shorten recovery time to as little as two weeks and restore function to over 95% in some patients.

These four case histories are a small representative sample of the large number of stroke cases we have treated. What is common in these patients is that all were treated very early and had nearly full functional recovery.

How can we make acupuncture maximally beneficial for stroke patients? Below are recommendations based on Zhu’s 50 years of clinical experience. There are a few important factors to consider.

I. Time is crucial

There is a misconception that acupuncture is contraindicated in the acute stage of stroke. Quite the contrary, acupuncture should intervene promptly, as early as the first hour after onset. Every hour of delay can potentially harm the outcome. The best treatment windows are, in decreasing order of therapeutic value: (1) the first three hours, (2) the first three days, (3) the first week, (4) the first month, (5) the first three months, and (6) the first six months. Both ischemic and hemorrhagic stroke can receive acupuncture treatment from the first day, but they differ in operation details.

Acupuncture has exceptional value in the first 3 to 72 hours. As evidenced by our own clinical cases, acupuncture seems to be able to salvage the penumbra surrounding the core of the stroke. Usually, about 72 hours after a stroke, cerebral edema starts to form and it is very damaging. Although the mechanism is not well understood, acupuncture triggers changes in the brain that result in the protection of brain cells from necrosis, thereby preventing or reducing edema and consequently promising a better prognosis. The often dramatic results in our stroke patients suggest that acupuncture could promote the reperfusion of the brain in a very short time, perhaps through the activation of the collaterals or the dissolution of fibrin around the clot. More research is needed to understand the mechanism.

Rehabilitation, like acupuncture, should also start as soon as vital signs are stable. This is particularly important for aphasia and dysphagia. Our experience shows that if speech therapy does not begin within the first month, speech recovery will be almost impossible or very limited. Again, ischemic and hemorrhagic strokes call for different types of rehabilitation exercises during the acute phase.

III. The right dose of treatment

Concentration and repetition are necessary to provoke and reinforce plastic changes in the brain. Hence, to achieve speedy functional recovery after a stroke, intensive treatments are paramount. The frequency and duration of acupuncture treatments (needling and Daoyin combined) must be adequate especially in the first three months. A daily three to six hours of focused and active Daoyin engagement is the most desirable. We recommend multiple short sessions to avoid fatigue. The average two to six hours a week that most stroke patients currently receive in outpatient rehabilitation facilities is dismally insufficient.

IV. Management and prevention of complications following a stroke

Acupuncture can be a major benefit to stroke rehabilitation when administered correctly. Results are most remarkable in the acute stage. First, treatment must begin promptly. Earlier intervention promises fewer deficits. Second, an effective acupuncture system should be employed. Scalp acupuncture excels over body acupuncture in treating neurological conditions such as strokes. After insertion, needles should be manipulated to ensure qi flow. Third, appropriate Daoyin must be carried out simultaneously. Finally, treatments have to be repeated frequently for reinforcement. In this manner a stroke patient will achieve a faster and more complete recovery.

By sharing our experience, we hope that acupuncture treatments for stroke can be optimized and that future research on this topic can yield more meaningful results.