Jing, or Essence: A Brief Attempt at Elucidation of a Key Notion in Chinese Medicine - Pacific College
Skip to content

Home › Jing, or Essence: A Brief Attempt at Elucidation of a Key Notion in Chinese Medicine 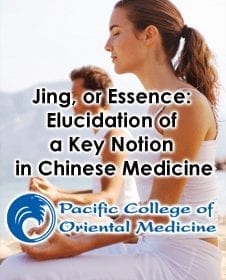 On the left hand side of the character for essence, jing, 精, we find the grain of rice or husked seed, 米, ready to be ground, kneaded and cooked. On the right, a green color is added, 青, qing. This is the green of young growing plants, 生, fed by rich sap; its life’s fluid, 丹, like the blood of human beings. Qing, 青, is the color that symbolizes the strength of human internal vitality that spreads to the furthest external parts. Husked seed, 米, also appears in the character for qi, 氣, depicting the release of vapor, 气, that results from cooking grain. Jing, 精, stresses the vitality that results from this same act of cooking. The character jing, 精, is used to describe husked grain that makes flour of the finest kind. It contrasts with whole grain, cu, 粗, which makes coarse flour. It is a gruel made from very pure rice, which would be something Confucius would enjoy, since one who nourishes oneself thus maintains life as a human being with the expected level of quality and purity.

Jing, 精, signifies what is purified, subtle, fine, excellent: the elite, the flower of quintessence, clarity (of spirit). It denotes things without artifice—the clever, the experienced, intelligent, penetrating—to concentrate upon. It is the Spirit (of a person) and the sperm. These meanings give the impression of a pure and powerful vitality expressed both in mind and body. Essence is the subtlest of all substances, in that it represents vitality as animation, like the soul or the spirit. It is also the vitality of substances that enables them to transform. It forms the basic fabric, the raw material that makes bringing life to beings possible.

When it is associated with Heaven, essence forms the subtlety of animation, the power that organizes all life and enables form to begin on Earth. It is the seminal pattern that controls everything that takes form and maintains it, its permanent reconstruction. When essence is associated with Earth, it represents the vitality in substances that enable them to ceaselessly transform, that is to say, to live. The term is so similar to the concept of spirit, shen, 神, that the two terms are not only used together as vital spirit, jing shen, 精神, but also sometimes as substitutes for one another.

Essence, jing, 精, always refers to the concentration or composition of substance. It is qi in concentrated form, analogous to the yin movement of condensate that forms the Earth. An embryo in the womb begins from this yin movement. This act of concentration is both mutual penetration, intertwining, interlocking, and the composition of substances endowed with the most vital form that comes from a father and mother (sperm and blood).

Essence is the raw material required to organize the composition of life. It contains specific qualities (like the seed of a tree) that come from Earth (such as genetic factors, the quality of the father and mother’s essences) but also from Heaven. The vital qi of Heaven arrives at a given moment upon this particular composition of essences, allowing a new life to start and determining its specific nature; it is the Anterior Heaven essence.

Essence is stored by the Kidneys to ensure their quality and to make it possible to produce and reproduce life, enabling it to grow and develop according to its initial model. With authentic yin, zhen yin, 真陰, essence supports the material manifestations of the bodily yin, such as liquids, blood, sperm, and marrow. They renew themselves through the constant distillation of digestion, the work of the Spleen and the Stomach; it is the Posterior Heaven essence. It is held, stored and transformed in the five zang organs. It fills the zang so that their qi can be released and ensure the presence of their spirits. The quality and protection of essence depend upon the conduct of life. Human beings must preserve the purity of their essence. They must keep intact the subtlety of their vitality. In terms of their body, mind and spirit, they must preserve what Heaven has bestowed upon them.

Essence represents a particular form of quintessence, the product of refinement and distillation. The quintessence of Heaven and Earth produces human beings. If they remain faithful to their nature, do not corrupt their essence or disturb the harmony that works upon it, they will develop the power of life and transmit this to their descendants. When people are in full possession of their vital force through the quality of their essence, their sexual energy will be at its height. The concentration of their spirit, perspicacity, and intelligence will also be at its height; their brain function perfectly and they develop their spirit and their mental power. If they continue increasingly to refine their essence through internal or external alchemical processes, it becomes the elixir of life, the cinnabar, dan, 丹, that opens the path to immortality.

In Chinese thought, the play of yin/yang, the foundation of all manifestations and vital activities, is expressed by the interaction of essence and qi. This interaction makes and breaks all the forms and expressions of life and endows them with their qualities and determining features. Essence and qi, jing qi, 精氣, are the pivot of the mechanism that enables life to move, supporting life at all its levels. They represent the play of yin/yang at the most subtle and the most general levels, being the essence of vitality expressed in substances animated by movement and transformation—that is, living creatures.

Essence is constantly transformed to release qi, nourishing and sustaining all physiological and mental activities. The qi ensures that essence is renewed and appropriately used in the body. The qi proceeding from the transformation of essence is the qi of the profound, authentic life of the human being. Transformations, hua, 化, represent the outcome of qi operating on essence.

As always, the qi can be understood in terms of two levels, as yin/yang, or as yang.

It is everything, the totality of yin and yang. Jing qi (精氣) can be understood as essential qi, vital qi, qi in the form of essence; that is, essence as yin. Likewise, when substance or fluid is penetrated and shaped by essence, in their vitality they lean toward transformation and movement (yang).

Essence can be thought as a condensation of qi, qi in its yin aspect. At the same time, it contrasts with qi in its yang aspect.

It is the yang. Jing qi (精氣) can then be understood to be a yin/yang pairing where the yang qi operates upon the yin essence and transforms and transports it.

The difference between these two meanings is not great, because there is always an interaction between yin and yang. The relationship of the essence released as qi and the qi that ensure the renewal, protection and function of the essence is yin and yang. Either one of the above interpretations can be taken depending on context.

The expression “essence and qi” (jing qi 精氣) has some similarity with blood and qi, xue qi, 血氣. In both cases there is absolute solidarity between the two components that include all that is vital. Blood and qi relates specifically to humans or animals, while essence and qi has a more cosmic aspect and a more general resonance. Although essence and qi relate to all the yin/yang interactions of vital processes, they cannot be grasped. They are seen through their effects, in strength and harmony, in decline or impairment of vitality. Blood has more visibility, making it possible to perceive the quality of the essence, while they remain imperceptible and subtle.

There is a strong connection between essence and origin, since reference is made to the essence of Anterior Heaven, xian tian, 先天, as well as to the essence of Posterior Heaven, hou tian, 後天. Blood always relates to Posterior Heaven. The essence and qi pairing adheres more faithfully to the original model. The balance between essence and qi, rooted in their adherence to the original model, forms the basis of the movement and operation of life. It represents the dynamism and nourishing richness of substances, as well as their interactions that create vital activity. It is the basis for the proper functioning of the body, in relation both to nourishment and defense, to blood and qi, to organs and reproduction.

It is also the foundation for the harmony that enables the spirits, shen, 神, to be present, and enables spiritual intelligence to develop, shen ming, 神明.