Massage is the application of a range of soft-tissue techniques, including kneading, rubbing, stroking, tapping and application of pressure. But more people are seeking the benefits of massage for depression and anxiety. Movement may be passive or active, all performed with the intention of affecting the body’s inner energetic systems. Oils and lotions may be used as part of aromatherapy and to reduce the amount of friction felt on the skin.

Massage is touted as one of the first treatments available for depression. However, with the advances in science and technology in the 1940s and beyond, the treatment of massage for depression and anxiety soon became replaced by drugs and other more scientific therapies. While massage is still an option, it lacks the same caliber of attention in comparison to pharmaceutical treatments. 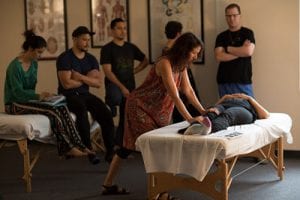 In 1996, Field, Scafidi, Grizzle and Schanberg examined the effects of massage for depression on 32 depressed teenage mothers. The mothers each received either ten 30-minute massage sessions or ten 30-minute relaxation therapy sessions over a course of five weeks. Both groups reported reduced anxiety following the initial and final sessions. However, the women in the massage group showed additional changes in behavior and stress hormone levels. The results of this study suggest that massage therapy had a beneficial effect on reducing stress hormone levels and improving behavior in this particular group of individuals.

Further research into massage for depression has been conducted by Dr. Wen-Hsuan Hou. Dr. Wen-Hsuan Hou sought randomized controlled trials, where a total of seventeen studies including 786 patients were identified by the researchers. Four of these trials compared massage therapy with a control group who received no treatment while thirteen of these trials compared massage for depression with an alternative treatment such as rest or relaxation therapy. A range of methods were used to evaluate levels of depression in the studies and each study was rated according to their quality. Overall, it was shown that massage therapy could potentially be beneficial in alleviating the symptoms depression.

Andrew Vickers, a former researcher for the Research Council for Complementary Medicine, has conducted extensive research into the benefits of massage for depression. Vickers claims that while massage is unable to cure depression, it can aid people in coping better and improving the quality of their lives, such as reducing stress, aid relaxation and cause the release of the hormone oxytocin.