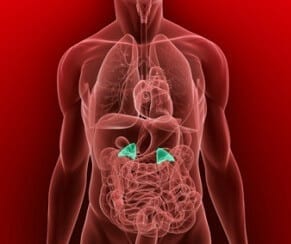 By Alex A. Kecskes

Adrenal fatigue often occurs when people are stressed out at work or home. During periods of excessive stress, our adrenal glands become overworked and produce excess levels of cortisol in response to the body’s fight or flight response. This prevents the adrenal glands from producing other hormones we need.

Do You Have Adrenal Fatigue?

So how does one know if they have adrenal fatigue? The symptoms include listlessness and lack of energy, especially in the morning. People suffering from adrenal fatigue also like to take afternoon naps to “recharge their batteries.” They always seem to lack the energy they need to perform the daily tasks of living. And they frequently crave foods high in carbohydrates, sugar and caffeine. Another symptom of adrenal fatigue is that sufferers just can’t seem to get enough sleep. For some reason, adrenal fatigue typically occurs more often in women than men. Some studies show that adrenal fatigue may even be linked to fibromyalgia and hypothyroidism.

Traditional Chinese medicine regards adrenal fatigue as a deficiency in the kidneys. Chinese herbs that can help adrenal fatigue include Kidney Yin building herbs–such as Rehmannia root. Follow up treatments include the Kidney Yang tonics such as Fenugreek, Damiana and Ashwaganda.

Changing one’s diet can have a significant impact on reducing the symptoms of adrenal fatigue. In particular, changing when and how much one eats during the day can produce some positive results. Instead of eating three big meals per day, small meals spaced out more frequently during the day can help. One should also eat foods that nurture the kidney. These include pork, sprouts, eggs, beans, barley, sardines, cheese and blueberries. Other foods that may help one’s kidney yin deficiency include kidney beans, black sesame seeds, walnuts, asparagus, sweet potato, string beans, celery, parsley, grapes and plums. In addition, one should consider avoiding heavily sugared sodas, alcohol, and highly salted foods. Smokers should try to stop or at least cut down on their intake of tobacco. And by all means, stress and other emotional strains should be avoided, if possible.

Acupuncture Can Provide Some Relief

Acupuncture can also help suffers of adrenal fatigue. TCM practitioners will stimulate key points associated with the kidney. In some cases, acupressure may be self-applied just inside the ankle between the medial malleolus and the Achilles tendon. One should  massage the area in a clockwise motion for five minutes on each side of the foot and repeat daily for best results.