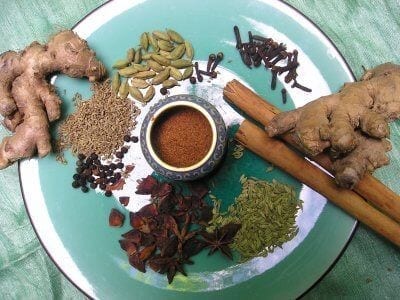 Legend and lore suggest chai tea was invented by a royal king in India who kept his recipe undisclosed and sacred. In fact, chai tea is a product of Ayurveda, a science of India that dates as far back as five thousand years. Chai does not refer to a particular type of tea, but the manner in which it is prepared and served, with milk/cream and honey/sugar. Traditionally each family would have their own recipe of herbs and spices to mix and boil with tea leaves. This recipe was based on available ingredients and the constitutions of family members. Typically, this is a highly potent blend that has myriad medicinal and health-promoting properties. Among the benefits of consuming chai regularly are increased digestive fire, a soothed and relaxed digestive tract, increased waste and toxin excretion, elevated metabolism, and decreased appetite.

Science is finding that tea (Black, Green, and Oolong), the main ingredient of chai, is an excellent source for anti-oxidants, good for the heart, and reduced cholesterol levels. In addition, numerous herbs are combined with the tea to give it its unique flavors and healing properties. It isn’t one herb or spice in general that aids in digestion but the combination of many acting together. The result is a delicious, piquant, and oftentimes dark brew.

Chai tea, like the human body, is a homogenous mixture of many compounds acting and reacting together to create harmony. As with soup, the ingredients, when boiled in water, draw out and enhance the flavors within one another before fusing together to form one wholesome decoction you can drink. Digestion begins with the mouth, and while sometimes we equate bad tastes and smells with beneficial attributes, such is not the case with chai. It represents a harmonious blend of all five tastes (sweet, sour, bitter, salt, and spice) recognized by the taste buds that is also pleasing to the other senses.

As stated previously there are virtually endless combinations of herbs and spices that can be used to create chai.  However, there are some staples used in nearly all, from the family recipe to store bought.  A breakdown of ingredients in many chai teas and their homeopathic applications will help elucidate how the unlimited amalgamations can be used to remedy various individual constitution disruptions and ailments, most specifically those related to digestion.

Black pepper is one of the first ingredients to stimulate the body, as it works with the taste buds and their relationship to the stomach.  The taste buds signal the stomach to excrete hydrochloric acid, which is necessary for digestion of proteins and other food components.  If food goes undigested by the stomach, it can sit for hours.  This leads to symptoms of indigestion and/or heartburn.  If undigested food moves into the intestinal tract, it begins to rot; the intestines are meant for absorbing nutrients, not digesting them.  As the food begins to rot it becomes an ideal place for gas-producing, diarrhea-inducing, and constipation-causing gut bacteria.  In addition, the outer layer of the peppercorn helps stimulate metabolism and the breakdown of existing fat cells.

Cinnamon is considered to be one of the world’s oldest known spices.  There was a time when it was considered such a commodity that it was used as currency.  It is found in nearly every chai.  It aids in digestion by calming the stomach, fighting bacteria and fungus, has been shown to increase production of insulin in test tube trials, and has anti-nausea and antidiarrheal attributes. Cinnamon also enhances the effects of other herbs and bridges the gap between flavors.

Fennel has also been well known for centuries by the Greeks, Egyptians, and Eastern cultures for its culinary and medicinal uses.  It is one of those superfoods, as it contains Vitamins C & B, and supports liver, gall bladder, and spleen function, as well as aiding in digestion by dispersing flatulence causing bacteria.  Fennel is also a good source of fiber so it helps to keep the large intestine and colon healthy.

Ginger has a mild, cool flavor that helps settle the stomach.  The gingerols and shogaols found in ginger have been proven to ease the effects of motion sickness.

Cloves, too, are often found in various chai teas.  They are revered for their ability to kindle the digestive fire.  Cloves are also good for soothing the throat and mouth and are sometimes incorporated into lozenges or sprays for such purposes.

Chai tea is available in storebought teabags, or if you are into making your own, the herbs are quite accessible and can be found year-round at your local health store.  Chai can be served hot or cold, though it is traditionally served with milk, cream, and honey.  The milk softens the flavor of the many potent herbs and the honey, sometimes referred to as the “Perfection of Sweetness”, balancing the spices.

Check out how TCM sees indigestion!