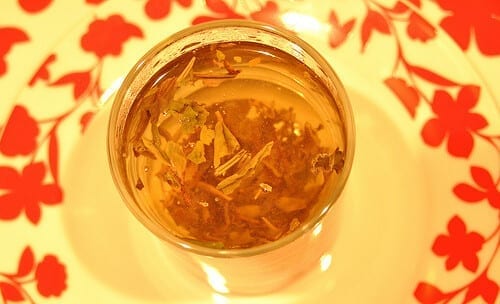 According to the Harvard School of Public Health, “54% of Americans over the age of 18 drink coffee every day”, with an average of 3.1 cups a day, totaling a spend of $40 billion per year. Though the benefits of caffeine have been confirmed study after study, the high cost and sugar content of caffeinated drinks combined with their addictive properties, is pushing individuals to look for alternative, healthier drinks. Healthy tea, and white tea in particular, has become a popular topic as more people try to kick the coffee habit.

There is an old Chinese legend that tells the story of how tea was born. Around 3,000 B.C. the emperor Shen Nung was traveling the countryside and ordered his water to be boiled. A sudden gust of wind blew a tealeaf into his hot cup of water and rather than pulling the leaf out, he let it steep and then drank the brew.

The history of white tea begins in the Chinese empire, with the Song Dynasty (960-1279). The white tea leaf was presented as a tribute to the emperor and was an inspiration for the Japanese Tea Ceremony.

The first written mention of white tea is in “Treatise on Tea” which was written by Emperor Hui Zong (1107-1110), praises white tea leaves as a rarity and luxury that were used to create floral-shaped cakes called “kua”.

However, an obsession with white tea unfortunately caused Emperor Hui Zong to lose much of his empire, in his quest of finding the perfect tealeaf.

After falling out of favor in the following centuries, white tea started gaining popularity in 1769, with the development of the first Silver Needle Pekoe Tea. Less than a century later a higher quality white tea variety was developed after tea plants were found in Fuding County in Fujian. Silver Needle Tea was developed in 1885 and White Peony Tea in 1922.

Studies On The Health Benefits Of White Tea

Recent studies at Pace University have shown that there is a major health benefit of white tea extract — it can kill bacteria, viruses, and fungi in the body with more success than other teas. The study focused primarily on the bacteria that cause Staphylococcus infections, Streptococcus infections, and pneumonia. The same study concluded that fluoride-rich white tea helps prevent the growth of dental plaque, the chief cause of tooth decay.

“Past studies have shown that green tea stimulates the immune system to fight disease,” says Milton Schiffenbauer, Ph.D., a microbiologist and professor in the Department of Biology at Pace University’s Dyson College of Arts & Sciences and primary author of the research. “Our research shows white tea extract can actually destroy in vitro the organisms that cause disease. Study after study with tea extract proves that it has many healing properties. This is not an old wives tale, it’s a fact.”

Another research study at Oregon State University in Corvallis has found that one white tea health benefit is the protection against colon cancer. The study suggests that white tea can be almost as effective as use of the prescription drug sulindac in preventing colon tumors in laboratory mice genetically predisposed to cancer.

A group of these mice that received no treatment each developed about 30 polyps in their colons. Research has shown that a therapy with sulindac, could cut polyp formation in these mice about in half.

Each type of healthy tea from green or black, to oolong or white, has a distinct difference. The dissimilarities that exist between them are caused from oxidation levels that occur after tea leaves are harvested. Tea leaves immediately begin to dry after being picked, and in the process, chemical changes occur that affect the tea’s flavor.

Typically, the longer the leaves are left to dry on their own, the darker they become.

The leaves are usually rolled to break them down and release juices that will contribute to their flavor and facilitate oxidation. At a certain point, the oxidation process is brought to an abrupt halt by heating (or sometimes steaming) the tea leaf. Green tea is dried for only a day or two, while black tea may be left to oxidize for as long as a month.

White tea is made from immature tea leaves that are picked shortly before the buds have fully opened. The healthy tea takes its name from the silver fuzz that still covers the buds, which turns white when the tea is dried. Immediately after harvesting, the leaves are steamed and dried, which keeps them from oxidizing and preserves the high antioxidant content. The result is a tea with a very delicate flavor, one that lacks the grassy aftertaste associated with green tea and has none of the tannins detected in black tea.

Other Health Benefits of White Tea

Because the tea leaf stays so close to its natural state, the benefit of white tea is that it contains more polyphenols, the powerful anti-oxidant that fights and kills cancer-causing cells, than any other type of tea. Another white tea health benefit is that it contains much less caffeine per cup than green, oolong, or black tea. This is due to the fact that the tea leaf is larger, underwent less processing, and is brewed in a cooler temperature than other teas.

As research continues to show that teas exert significant protective effects, and aid the body’s immune system against myriad diseases and bacteria, it is important to note that that is not the only benefit of white tea. The polyphenols in white tea have also been shown to lower cholesterol, reduce blood pressure and fight fatigue. For all the white tea health benefits, it is a great addition to anyone’s preventative health routine.