Home › The Most Accurate Portrayals of Nurses on TV 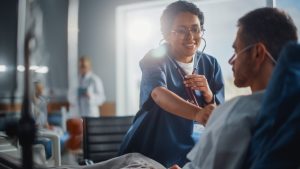 How are nurses portrayed on TV? A little more realistically than the 1950s when they were stereotyped females in white hats obeying famous television doctors. The average nurse portrayal in the media is a little more accurate today than it has been in prior decades, but medical shows still sacrifice realism for entertainment value. Grey’s Anatomy is probably the best-known medical show, and it doesn’t always win the highest marks for accuracy in nursing portrayals. However, it’s just one of the medical shows that has had memorable nursing storylines and characters. We’ve put together an overview of nurse portrayals in some of the best-known U.S.-based healthcare-oriented television programs.

Grey’s Anatomy has been one of television’s most popular medical and healthcare shows since it launched in 2005. Created by Shonda Rimes, the show revolves around its namesake character Meredith Grey and surgical interns and their mentor physicians. In 2019, Grey’s Anatomy became the longest-running primetime medical show in history, beating out ER.

Grey’s Anatomy usually doesn’t go into much detail about the medical conditions on the show, and the plots usually revolve around personal conflicts and romance, not day-to-day medical care. Physicians comment that some of the residents and interns use their medical equipment inaccurately. They also note that very few actual medical staff would enjoy having “intimate liaisons” in call rooms for many different reasons, including professionalism and cleanliness.

The biggest problem with Grey’s Anatomy‘s portrayal of nurses is that it barely shows them at all, and when it does, they’re in romantic situations instead of medical ones. According to a nurse at Texas Children’s Hospital, surgeons are amazing, but they don’t do every task in the hospital the way Grey’s Anatomy portrays. Grey-Sloan Memorial is also a dangerous place for its staff, with cast members getting shot, drowned, and electrocuted on the job. The extreme drama, frequent sex, crimes, and natural disasters are fun to watch on television but don’t reflect real life on the job for nurses.

Private Practice is another show created by Shonda Rimes, and viewers have praised the character of labor and delivery nurse Stephanie Kemp, portrayed by Justina Machado. Stephanie Kemp has had some realistic scenes and storylines in the show, and her character is usually portrayed as intelligent and capable. However, most nurse characters on the show have been shown as administrative support to physicians, seldom playing leading roles or shown as providing nursing care.

Unfortunately, like Grey’s Anatomy, Private Practice‘s tv nurses are in the background throughout most storylines. A popular nurse character, midwife Dell Parker, was killed off in 2010, after announcing she had been admitted to medical school. The storyline seemed to send the message that attending medical school was preferable to a graduate education in nursing. Dell Parker also “got a lot of coffee and answered a lot of phones,” creator Shonda Rimes told interviewers.

Until Grey’s Anatomy surpassed it, ER was the longest-running medical show on television. Unlike many other medical shows, ER generally gets positive reviews from nurse viewers–and not just for being the show that included George Clooney as a hunky pediatric emergency room specialist. ER was intended to portray the dramas and challenges faced by the staff at a Level One Trauma Center. One of the most popular nurse characters on the series was Carol Hathaway, portrayed by Julianna Margulies. In addition to being the longtime love interest for Clooney’s character, Nurse Hathaway also advanced in her career and became a nurse manager. Two other nurse characters, Abby Lockhart (portrayed by Maura Tierney) and Sam Taggart (Linda Cardellini) portrayed relatively realistic emergency room nurses who also had realistic storylines from time to time.

Chicago Med is a medical show that doesn’t just focus on a small group of physicians, it also shows the lives of three nurses who play vital roles at the hospital. April Sexton, portrayed by Yaya DeCosta, along with Maggie Lockwood (portrayed by Marlyne Barrett) and Sharon Goodwin (portrayed by S. Epatha Merkerson) are mainstays at the hospital. These three nurses are often mentioned as some of the most realistic and in-depth nurse characters on television.

Emergency Department staff nurse character April Sexton is often featured providing direct care. Charge nurse Maggie Lockwood is shown running the Emergency Department and dealing with logistics. Goodwin is presented as the executive director of patient and medical services and has authority over ER and OR physicians. Direct technical care is often shown accurately on Chicago Med, and unlike other media nurse portrayals, nurses are also shown discussing care with physicians and advocating for patients.

Like other medical shows, some viewers say that The Good Doctor doesn’t often show nurses in action, preferring to focus on the physician characters, particularly its main character Dr. Shaun Murphy (portrayed by Freddie Highmore). But one of the nurses in a 2020 episode was portrayed by Rebecca Brown, a real-life nurse. Brown was interviewed for International Nurses Week along with actor Fiona Gubelmann, who portrays Dr. Morgan Reznick, and the two discussed how their scenes had elements of on-the-job realism.

However, The Good Doctor‘s leading cast of nearly-all doctors shows that like many other medical shows, the emphasis is on doctors and their lives with nurses are relegated to supporting roles.

Scrubs features ER nurse Carla Espinosa, portrayed by Judy Reyes. Nurse Espinosa is often called one of the strongest Latina portrayals on television, and she ranks highly in nurse portrayals in general. Her storyline featured a realistic decision to become a nurse practitioner, as well as examples of how nurses informally teach residents. Scrubs also uses humor, making it more similar to a classic show like M*A*S*H than some of the heavy drama- or romance-oriented, serious nighttime medical dramas. Nurse Espinosa is a favorite character among TV nurses, and Scrubs also deserves some positive recognition for its portrayal of male nurses.

Nurse Major Margaret Houlihan was called “Hot Lips” on the hit 70s show M*A*S*H, which is still available on streaming networks. M*A*S*H, which ran for 11 seasons between 1972 and 1983, dealt with the daily lives and challenges of a mobile army surgical hospital during the Korean War (1950-1953). Nurse Houlihan is portrayed by actor Loretta Swit, considered a sex symbol but also a symbol of independent women during its mid-century period.

While much of the show revolved around comical pranks played by its army physicians, “Hawkeye” Pierce, Trapper John, and B.J. Hunnicutt, every show included realistic conflicts faced by Nurse Houlihan and her nursing staff. “Hot Lips” stood up to the male-dominated Army brass and advocated for patient care in one of the toughest environments, an army field hospital during active combat. M*A*S*H is praised for mixing humor with realistic trauma situations. As the show developed, Nurse Houlihan is shown more as a leader and mentor to the nursing staff of the field hospital.

Our Takeaway on TV Nurses

Even though decades have passed since the first medical television shows, the average nurse portrayal in the media does leave something to be desired. Medical shows with comedy elements, like Scrubs and M*A*S*H, seem to find ways to provide a little bit more realism than shows that focus on drama and romance.

Nearly every nurse portrayal on television seems to be part of a physician- or surgeon-oriented show, rather than a nurse-centered program. The one show we looked at that does focus on its primary nurse character, Nurse Jackie, focuses on the character’s addiction and personal conflicts, not on-the-job nursing duties. Overall, it seems as though the way that the way nurses are portrayed on TV meets the needs of entertaining drama and escapism rather than realism.