Growing up with my family in Taiwan, consuming herbal foods was part of our daily life. When my menstrual cycle started at the age of fourteen, my mother began cooking herbal medicine. Intrigued neighborhood aunties would visit and ask why, and mother proudly shared that I was “becoming an adult”. The soup I drank was black, earthy, and rich; it was a soup unlike all the others we sipped at family meals because it marked my entry into adulthood. As time went on I learned that the special herbal formula called Ba Zhen Tang, was a 900 year old decoction passed down by herbalists for centuries. Ba Zhen Tang translates to the “Eight Treasure Decoction” and was first recorded during the Sung Dynasty (AD 1,107- 1,100). Every month after menstruation, I would drink the earthy soup with great appreciation, imagining the ancestral herbalists watching over me.

I grew up in a large family and always imagined having children. It was common knowledge in Taiwan that if a woman gave birth, a month-long confinement would follow. I would hear stories about new mothers staying home and being discouraged from touching anything wet or cold (including water) and thought to myself, “If I have a baby, I won’t be able to shower for a month? Why?!” The questions I asked when I was a little girl are the same questions patients ask when I talk about confinement and the principles of traditional Chinese medicine (TCM) in postpartum care.

My aunt flew from Taiwan to provide traditional confinement care after the birth of both of my children in 2013 and 2015. My daughter was born at home and I delivered my son at a birthing center; both were over 9lbs. After both deliveries I was diagnosed with a third degree uterine prolapse. We consulted my OB-GYN, my midwife, and doula for guidance on how to best treat this severe injury. The western solutions were both invasive: either insert a metal umbrella to open and lift my uterus, or use staples to hold my uterus in place. Coming from a TCM background, my aunt discouraged both approaches and consulted her elder sister who had an established a confinement center in Los Angeles 15 years prior; she proposed something else. Three pieces of abdominal binding material were sent to me. For the following few weeks, my torso was bound for organ support and I slept with three pillows under my pelvis to encourage my uterus to return to its original position. It was arduous, but didn’t require any surgical procedures, and to my amazement I recovered from my uterine prolapse. I have been a firm believer in TCM postpartum care ever since.

What is Confinement / Sitting the Month?

Sitting the Month or “Zuo Yue Zi” / 坐月子 is a special postpartum care practice typically starting immediately after birth. It can vary in length but usually ranges from 26 days to 100 days. This practice of postpartum care is designed specifically for new mothers to rest, reset, and recover.

“Sitting the Month” was traditionally reserved for queens, empresses, or very wealthy women who were able to focus on rest and recovery post-delivery. Imperial doctors believed that the universe gave a mother one opportunity to change her internal constitution after she risked her life to bring new life into the world. Observing postpartum care was said to have the ability to rid a mother of her childhood illnesses, allergies, headaches, migraines, cold hands and cold feet with the help of the openness of the body. The month following the birth of the child is often referred to as the “golden period,” when the mother’s body is now a “blank slate” and can be reset. Following the TCM PPC healing principles provides an opportunity to be even stronger than you were before pregnancy. Over the last century, “Sitting the Month” has become much more common in many countries including Taiwan, China, Korea, Japan, Hong Kong, India, Malaysia, Iran, and Latin America.

Bob Flaws, author, translator, and editor of over 80 books on Chinese medicine, stated that “until only fairly recently, the history and practice of Chinese medicine was rife with sectarianism. Students of one teacher or adherents of one school jealously guarded their theories and techniques, seldom sharing these openly” (Shou-Zhong, Y., & Da-Wei, L., 1992, page viii). As a result, many of these TCM postpartum care techniques were not documented. Historically, only men were doctors and received an education to become literate. Midwives were women, who either did not have the ability to document nor received the recognition or credit for their clinical experience. Two of my aunts provided traditional confinement services for over 15 years. Their wisdom and clinical experience are considered treasured family secrets. There were many healing methods and modalities passed down from my grandmother’s godmother when she was 90 years old. Looking back on this rich legacy and history, I now understand how their practice influenced the development of TCM today. It has become my mission to document their wisdom and share the practice of postpartum care with my patients.

The avoidance of “cold” is a concept rooted in the TCM philosophy that our bodies have a hot/yang and cold/yin nature, which must be balanced for good health. Giving birth places the body in a “cold” state resulting in the body’s qi or energy moving slowly. In a common vaginal delivery, women push and open up their body, meridians, and pores for 12-14 hours. Dr. Sun Simiao / 孫思邈, who was born in the 6th century, stated that, “the reason for the presence of increased sickness in the body is always related to the excessive consumption of cold substances and by immoderate eating and drinking in the spring and summer.”

Keep in mind that during the first week of postpartum, new mothers will feel hot due to the persistence of the hormone adrenaline from the birthing process, which floods into the bloodstream. In TCM, this sensation is referred to as “True Cold, False Heat” which creates an illusion that has potential to lead to behaviors that can further damage the body such as walking barefoot and having fans or air conditioning blowing directly on the new mother.

On the left side of the graph (Balance), we see that the yin and yang or cold and hot are in perfect harmony as we would see in a healthy individual. After birth, see the fourth diagram from the left: yin deficiency (Heat Xu), where the female body loses yin nourishment after birthing another human qi (the baby), while the yang maintains the same level. This causes the female body to experience a sensation of heat, which produces the “True Cold, False Heat”. It is important not to be fooled by this illusion.

The TCM approach to postpartum recovery differs from the Western approach. In particular, the Western concept of using a cold compress to heal a wound directly contradicts the TCM approach. In many hospitals in the U.S., it is customary to use cold packs or ice compresses to “soothe” the wounds and reduce swelling tissues by placing them on the vagina. More recent studies show that using ice packs as a healing method only delays tissue healing. A core tenet of TCM is that cold slows down the body’s healing process as it congeals the blood and penetrates cold deeper into the body. In my clinical practice, I frequently found that patients who used ice to heal after birth had blood clots that are the size of their palm. The large blood clots look like placenta, which is between the color of brown and dark red. In the western hospital, this condition is considered common and even “normal.”

TCM practitioners focus on nourishing the yin for the new mother’s body by prescribing herbs that are in the following categories: warming the interior and expelling cold, stabilizing and binding, and relieving toxicity to clear yin deficiency. Some classic formulas are essential, such as Sheng Hua Tang, Si Wu Tang, Ba Zhen Tang, and Shi Quen Da Bu Tang. In the early Qing Dynasty (at the end of the Ming Dynasty), a well-known TCM practitioner and gynecologist named Fu Qing-Zhu / 傳青主 and his disciples conducted clinical studies as part of his gynecological practice. Dr. Fu was born in Tai Yuan, Shanxi in 1607, 414 years ago. During that time, he studied the many challenges that made it difficult for mothers to deliver their babies and proposed formulas to treat them including Xia Tai / Descending the Fetal Placenta: In the case in which the fetal placenta does not descend, Sheng Hua Tang / Dissolving the Clots Decoction was prescribed to promote blood flow.

Centuries ago, it was common for wet nurses, Nai Ma / 奶媽 (literally meaning “Milk Mother”) to nurse newborns. Imperial biological mothers would consume soups that focused on tonifying their bodies and often included Ginseng (Ren Sheng). Red Ginseng is not prescribed to wet nurses who need to breastfeed as it stops the essence (breast milk) from leaking and consequently restricts the production and letdown of breast milk. In folk medicine, it is called Hui Nai / 回奶 (return the breast milk into the body) or Sui Nai / 縮奶 (shrinking the breast milk production).

Special confinement soups and herbal decoctions are prepared to change the viscosity of the breast milk and to promote healing for the postnatal mothers. Common warming herbal teas are prescribed for new mothers, such as cinnamon tea. Cinnamon warms the body, boosts blood circulation, promotes healing, and tonifies the yang. One of the most common herbal desserts is white woodear and lotus seed soup, which harmonizes the heart and lung relationship.

TCM explains that the female body goes through significant changes every seven years. Many modern women become mothers between the ages of thirty-five and forty-two, which falls between the fifth and the sixth cycles. Menopausal changes occur when women are transitioning into the seventh cycle. It has been reported that there is an increase in modern mothers experiencing menopausal signs and symptoms when their children are under seven years old. 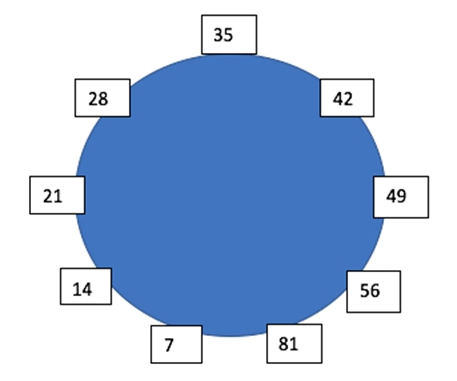 This practice is used to not only preserve a woman’s health and strength, but also to change her body constitution. If postnatal mothers can practice TCM PPC guidelines, they will enjoy many long lasting health benefits.

Some examples of the herbs I cook for my postpartum patients: 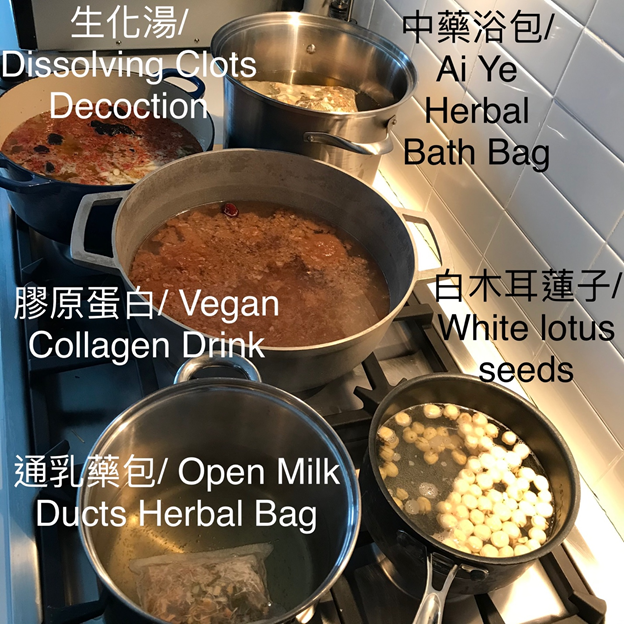 Binding in TCM PPP produces profound results. Here are a few examples from my private practice. 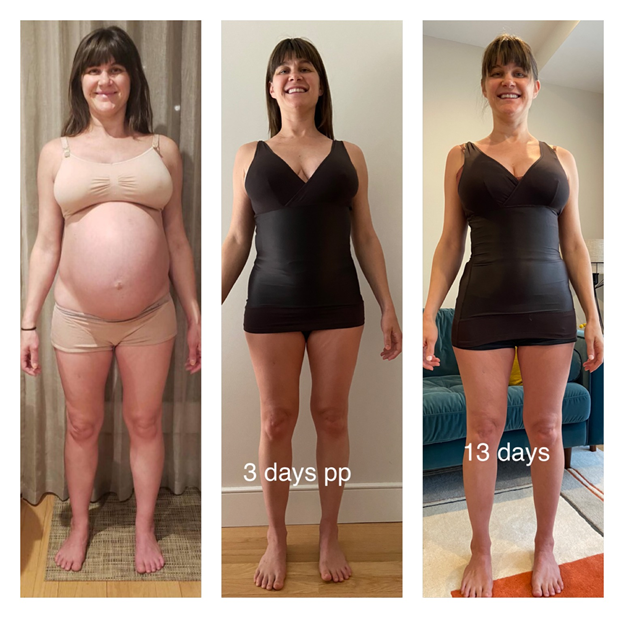 Dr. Lily Yeh Gillespie, DACM, is a licensed acupuncturist and clinical herbalist. She was born and raised in Taiwan and immigrated to the United States when she was fifteen. Lily received a Bachelor’s of Arts in Dance Education from East Carolina University and a Master’s of Fine Arts in Dance Choreography from the University of North Carolina. She performed with Kun Yang Lin and Dancers and taught at Scilla Dance Studio in New York for over 15 years. Through dance, Lily gained an intimate perspective of the biomechanics and movement and pivoted her focus to study the human body through a scientific lens.

When Lily returned to school for acupuncture and traditional Chinese medicine, she returned to her roots. Growing up with her family and consuming herbal dishes were part of everyday life. Studying TCM helped her gain a deeper understanding of how the human body functions biomechanically, emotionally, and spiritually as a whole. Lily specializes in women’s health, fertility, and postpartum care. She and her husband have a private practice in New York City and are raising three beautiful children in Princeton, New Jersey.