How Do You Treat Sinus and Respiratory Allergies? - Pacific College
COVID-19 INFORMATION
Skip to content

Home › How Do You Treat Sinus and Respiratory Allergies? 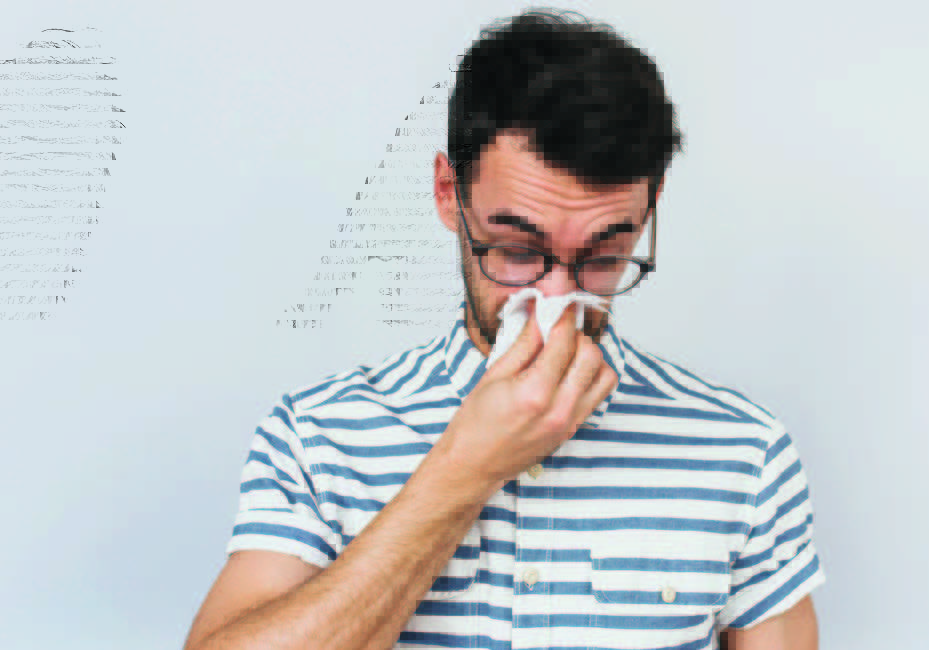 How do you treat sinus and respiratory allergies? Tell us about some of the allergy clients who have been helped with Chinese herbs.

When I was going over my files in preparation for my class on allergies and Chinese herbs, three cases really stood out. There was a gentleman who didn’t want to take any allopathic medicines. He was suffering constantly, so most days, just about every hour, he was having significant allergy symptoms. He followed the allergy protocol and the Digestive Clearing Diet [i]. I developed, and within two weeks his condition totally turned around. The next case was a gentleman who was on a combination of Flonase®, two antihistamines, NasalCrom®, and steroid eye drops, and he was still having symptoms, which is why he came to me. He simply followed the protocol and a no-alcohol diet and within days his symptoms were eliminated. The final case involves a practitioner who used to exclusively use Asian patent medicines, typically what is seen on the shelves of apothecaries in Chinatown. He recommended an allergy relief formula to a patient who, after taking his first dosage, experienced sweating, dizziness, and a racing heartbeat. As a precaution, the patient drove to an urgent care clinic, where he was stabilized. The herbs were analyzed and found to have ephedra, which is currently banned in the USA. The practitioner decided to use Chinese herbal formulas made in the USA due to improved quality controls and transparent labeling. An overdose of ephedrine can lead to unpleasant symptoms such as anxiety, restlessness, tremor, insomnia, dizziness, difficulties in breathing, excessive sweating, delirium, convulsions, and others. A couple of the most dangerous overdose symptoms are heightened blood pressure and irregular heartbeat.

What typical allergy symptoms do you have success treating?

Many symptoms of allergic rhinitis include itching of the nose, roof of the mouth, and eyes; sneezing; excessive mucus; and frontal headache. We have had success reversing sinusitis and helping clients with have allergic asthma who sought to reduce their use of pharmaceutical medicines, especially steroids and inhalers.

Cause of allergy according to TCM

Allergic symptoms are related to wind in Chinese medicine. In order for wind to invade, defensive energy, wei qi, must be weak.

It is our experience that almost all clients with allergic rhinitis have spleen qi deficiency. Spleen deficiency can cause phlegm, including deep lying phlegm. In American patients, spleen qi deficiency can be caused by poor diet, excessive work, over-worry, or Western medicine side effects. In this context, poor diet means too much sugar, sweets, alcohol, and allergens (particularly dairy products). It is said in TCM that the lungs are a “delicate viscus”. This means that lungs are particularly vulnerable to allergens and pathogens. When the lung organ system is weak, it fails to direct energy downward. If the lungs fail to descend fluids, they may accumulate, transforming into dampness and phlegm.

Sneezing, nasal discharge and congestion are examples of counter-flow lung qi. Thus, the treatment for most clients in USA with allergic rhinitis is to tonify the lungs and spleen, dry dampness, circulate blood, and eliminate wind. Other diagnoses we occasionally see in Western allergic rhinitis clients are kidney yang deficiency and liver stagnation.

Could you describe allergy in greater detail?

In biomedicine, allergic rhinitis occurs when the body’s immune system over-responds to specific non-infectious particles like plant pollens, molds, dust mites, animal hair, industrial chemicals, foods, medicine, and insect venom. Seasonal allergic rhinitis, sometimes called hay fever, typically occurs in late summer or spring and is basically a sensitivity to ragweed not hay. About 75 percent of all Americans have some level of seasonal allergic rhinitis, which is why these protocols are so important. There is also perennial allergic rhinitis. For my patients who suffer allergy symptoms 24/7, they can have sensitivity to pet hair, mold, houseplants, carpeting, and upholstery, and it seems that air pollution such as auto exhaust can also aggravate allergic rhinitis. It is surprising to me how many people live with cats when they are allergic to them. One of my herb teachers taught class in his house where he lived with his wife and three cats. Both the herb teacher and I were allergic to the cats, so I always had to take anti-allergy herbs before going there. The herb teacher had built up his immune system with herbal formulas, so he didn’t have to take seasonal herbs routinely as long as the cats did not sleep in the bedroom.

What is the link between sinusitis and rhinitis?

The new term for sinusitis is rhino-sinusitis, because in the Western clinic, it has been observed that most patients start out with rhinitis and it may develop into sinusitis. There is definitely a link between sinusitis and rhinitis. ENT practitioners have concluded that sinusitis is often preceded by rhinitis and rarely occurs without recurrent rhinitis. The symptoms of nasal obstruction and discharge and loss of smell occur in both disorders. CT scans validate these findings. Therefore, it is important that we treat on the basis of traditional Chinese medicine; again, because for many years the Western concept was to look at these conditions separately, and now we know they’re very linked, which is entirely consistent with the principles of traditional Chinese medicine. So people still ask how do you treat sinus and respiratory allergies? Knowing these conditions are linked is important.

Can drugs contribute to allergy symptoms?

Drugs can cause allergic rhinitis; the overuse of decongestant sprays can worsen the problem, as well as oral contraceptives, hormone replacement therapy, anti-anxiety drugs, some antidepressants, and drugs used to treat erectile dysfunction. Some blood pressure medications such as beta blockers and vasodilators can also cause rhinitis. Of course, cocaine can damage the nasal passages, and estrogen in women can cause allergic rhinitis. Chemotherapy agents and biological drugs used in the treatment of autoimmune diseases can increase hypersensitivity.

The side effects of antihistamine drugs, which many of our clients have tried, include dry mouth, drowsiness, dizziness, nausea and vomiting, restlessness or moodiness, trouble urinating, blurred vision, and confusion.

What is the allergic load?

Allergic load means there is a pileup of allergens, just like a pileup on the freeway, that typically causes the major symptoms, and so we need to remove some of the burden placed on the immune system by reducing the allergic burden. How can we eliminate the allergic burden? One aspect is industrial chemicals; for instance, there was a man we weren’t able to help. It turned out that his rhinitis and sinusitis were actually caused by a gas leak, so we always want to make sure we are ruling out chemical exposure and pollutants. Pollens, molds, dust mites, animal hair, and tobacco smoke, including secondhand smoke, also increase the allergic load.

What are the most common food allergens and how does this relate to allergic rhinitis?

The most common food allergens in the United States are dairy, eggs, peanuts, wheat, soy, nuts, fish, and shellfish. Many people also have sensitivity to corn, particularly high fructose corn syrup. For clients with allergies, it is also important to greatly reduce sugars, sweets, sweeteners, and alcohol. Many of my clients with rhinitis and sinusitis symptoms can obtain significant relief just by eliminating alcohol and taking herbs.

I understand you have developed an effective allergy protocol. Please describe it.

I have developed a formula called Xanthium Relieve Surface™, which is an example of a modern tableted Chinese herbal formula developed in the west. It is comprised of xanthium fruit (cang er zi), magnolia flower (xin yi hua), Platycodon root (jie geng), Schizandra fruit (wu wei zi), Angelica root (bai zhi), wild chrysanthemum flower (ye ju hua), siler root (fang feng), Schizonepeta herb (jing jie), Astragalus root (huang qi), white Atractylodes root (bai zhu), and licorice root (gan cao). In clinical practice, we can combine Xanthium Relieve Surface with formulas that tonify wei qi, clear phlegm, or treat allergic asthma symptoms. The vast majority of patients see results within a few days. Some of these clients have been on symptomatic medication for years. For example, Gary had had seasonal allergy symptoms for years when, seeking an antihistamine alternative, he visited our clinic. We recommended Xanthium Relieve Surface and a formula to build up wei qi based on yu ping feng san (YPFS) along with daily nasal irrigation. Within 24 hours, he contacted us to say the two formulas in combination worked better than the antihistamine he had been on for several years. We counseled him to stay on the two formulas until allergy season was over, and continue YPFS. Gary reported that his allergy symptoms were much milder in spring after taking YPFS all winter. YPFS is more beneficial when used for more than three weeks. It is particularly effective for itchy nose, sneezing, blocked nose and runny nose.[ii]

Some patient’s allergies are exacerbated by mold. What do you suggest?

For allergies and yeast syndrome or mold sensitivity, we use Xanthium Relieve Surface, an anti-fungal diet such as Digestive Clearing Diet, and either specific anti-fungal herbs or Western medicines to lower fungal counts. Many sinusitis cases we see involve fungal sinusitis, which is often caused by inappropriate use of antibiotics. This process is used to treat sinus and respiratory allergies.

In our experience, 80 percent of American clients do not take adequate dosages of herbs; therefore it is important to monitor compliance. It is also important to choose a delivery system for Chinese herbs that yields the best compliance. Teas, powders, and pills all have their place. For the vast majority of American patients with allergic rhinitis, high quality formulas in pill form will yield the most satisfactory results. Finally, if compliance is adequate and your clients are not achieving symptom relief, be prepared to re-evaluate your diagnosis and change your treatment strategy, and consider focusing more intently on dietary and lifestyle counseling. Because allergic symptoms are so common, clinicians should offer effective herbal formulas for themselves, family members, and patients.

Andrew Gaeddert is an authority on the western applications of Chinese Herbs. He has over thirty years of experience. His latest book, Healing Digestive Disorders, 4th edition, is published by PMPH, one of the largest medical publishers in China. He can be reached at [email protected]