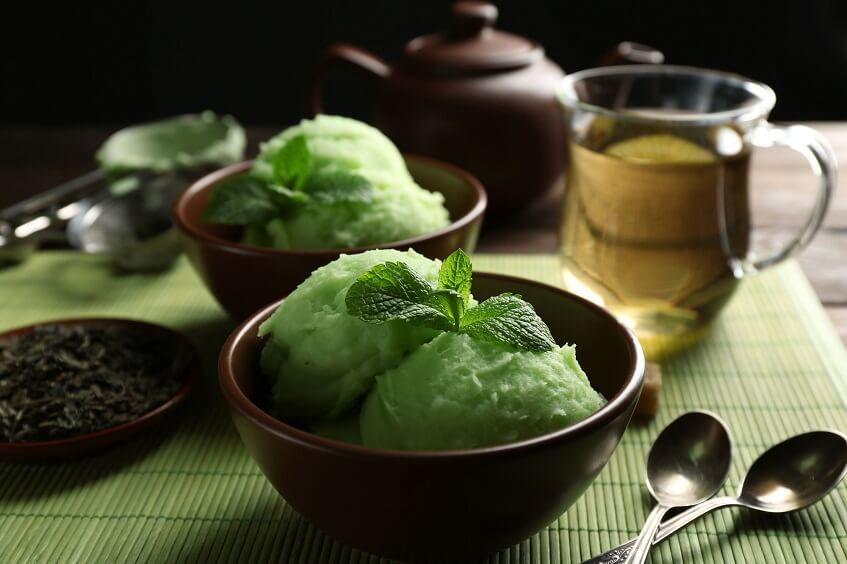 Summer has arrived and nothing sounds better than a scoop of ice cream on a hot afternoon.  Beat the heat and quell your cravings for sweet treats by making your own green tea frozen yogurt. This increasingly popular frozen dessert delivers numerous health benefits, including the anti-aging and cancer prevention associated with green tea. Additionally, by swapping out ice cream for frozen yogurt, you get the added protein and digestive power of yogurt — especially if you use Greek yogurt.

Although green tea frozen yogurt is typically made with powdered versions of green tea, a couple of tea bags can also do the trick. Begin by heating half-a-cup of milk and then steeping with three bags of your favorite green tea. After removing the tea bag, wring it out over two-and-a-half cups of yogurt so as to further enhance the flavor. Add half-a-cup of powdered sugar and mix everything together before churning in an ice cream maker and freezing. The ensuing frozen yogurt will be quite pale, but this lack of color does not detract from the numerous health benefits it delivers.

Popular among holistic health experts and bodybuilders alike, matcha is a powdered version of green tea that delivers a whole host of health benefits on the go. Just as mixing matcha into hot water is easier than brewing tea, matcha allows for almost immediate satisfaction of frozen yogurt cravings. Simply mix two cups of yogurt with half-a-cup of powdered sugar and one tablespoon of matcha powder. Let the mix sit in the refrigerator for two hours before churning in an ice cream machine and storing in the freezer.

Concerned about the sugar content of the above recipes? No worries — there are plenty of options that keep the sugar to a minimum. The simplest of these involves substituting the sugar in the above matcha recipe with Truvia or some other sugar substitute. For a more natural alternative, add one tablespoon of honey for every cup of frozen yogurt.

Making frozen yogurt without a machine

Not everybody enjoys easy access to an ice cream machine, but fortunately, there is no need to make a huge purchase or limit yourself to store-bought frozen yogurt. Begin by mixing the yogurt according to your favorite recipe, be it the standard matcha recipe above or the no-sugar alternative. Instead of churning the mix in an ice cream maker, use a whisk to mix it thoroughly. Place in the freezer and take out every fifteen minutes to mix again.

If a scoop of green tea yogurt just isn’t enough to satisfy your sweet tooth, a green tea frozen yogurt parfait may do the trick. Use any of the recipes highlighted above to create a delicious batch of frozen yogurt, and then, alternate a quarter to half a cup of frozen yogurt with the same amount of fresh fruit. Top with granola for a satisfying crunch.

Making your own green tea frozen yogurt is a fun and healthy way to beat the summer heat. If you’re interested in becoming a more balanced individual and helping others do the same, learn more about becoming a student in one of PCOM’s acupuncture, massage therapy or holistic nursing programs.