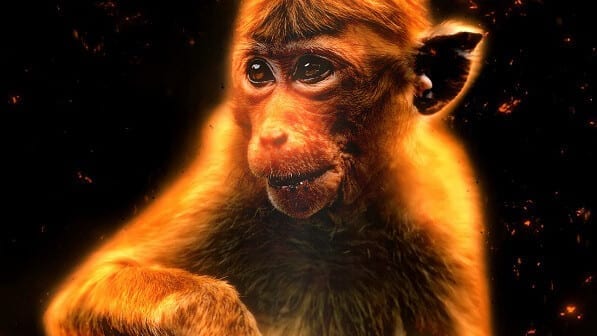 Welcome to the Year of the Fire Monkey! Chinese New Year celebrations commence on February 8, running until the Lantern Festival on February 22, the first full moon of the new year. Chinese New Year traditions vary across the world, but as the largest holiday of the year, the common thread is the celebration of family, luck, and ancestors. The Year of the Monkey should be a lively one, with rapid changes and upturns in arenas from politics to finance, though there may be an undercurrent of insecurity and potentially damaging competition. The ongoing El Niño weather phenomenon, for example, while unusual for a typical year, is right at home in a Fire Monkey year. If you’re typically quick on your feet, stay particularly aware and keep your eyes open for opportunities; this is a rewarding year for the brave and inventive.

2016 is the Year of the Fire Monkey, the ninth animal in a twelve-year cycle, with an element (Fire, Earth, Metal, Water, or Wood) assigned to each cycle. Those born in 1944, 1956, 1968, 1980, 1992, 2004, and this year are Monkeys; the last Year of the Fire Monkey specifically was 1956. Will Smith, Julius Caesar, Bette Davis, Johnny Cash, Susan B. Anthony, Leonardo da Vinci, Annie Oakley, and Empress Wu Zetian of the Tang dynasty are some of the better-known Monkeys.

The Fire Monkey is the most active and aggressive Monkey, naturally dominant and competitive, flamboyant and charismatic, with many friends. The Fire Monkey needs control, tending to gravitate towards leadership, though this can, without care, turn into jealousy and egotism; the Monkey is excellent at nurturing those under her or his care, however. Fire Monkeys also love to learn and laugh; it’s going to be a good year for students and entertainers of every kind.

In China, celebrations of the New Year begin on the eve of the holiday, with the entire family gathering for a reunion dinner. Getting to the reunion itself can entail an arduous journey as nearly everyone in the country gets in a car, train, or bus to travel home for the busiest travel season of the year. The railway system adds hundreds of additional passenger trains to accommodate the increased traffic of five million trips in a two-week period, people can spend hours standing in line for tickets, and buses are crammed well past capacity.

Arriving at home for dinner is a very welcome relief. The traditional meal involves fish, representing prosperity and fortune. In northern China, the meal is typically home-cooked, usually with dumplings; in the South, everyone goes out to eat, usually having Nian Gao or Year Cake for dessert. Elder members of the family give red enevelopes of money to the children as gifts, and everyone stays up to watch the New Year come in, playing games and setting off firecrackers.

In the final few days of the two-week period, the Lantern Festival activities begin. In Taiwan, families release floating lanterns together; in Singapore, massive crowds gather to watch lantern displays. The Lantern Festival has many different myths surrounding its origin. During the Han dynasty, which reigned over much of what is now China from 206 BCE until 220 CE, the festival honored Ti Yin, god of the North Star, who was seen as the embodiment of the balance between yin and yang. Another legend says that a heavenly crane once flew down heaven on the first day of the new year, only to be killed by villagers. This angered the Jade Emperor, king of the gods in the traditional Chinese pantheon, so much that he planned to send his troops to destroy the village with fire on the fifteenth day of the year. His daughter warned the villagers of her father’s rage, however, resulting in chaos until a wise man suggested that the villagers set up great bonfires and light off fireworks to give the village the appearance of already being in flames when the Jade Emperor’s army arrived to wreak his vengeance. The plan worked, the village was saved, and people have celebrated the village’s survival ever since.

In all of these activities, the Chinese New Year is meant for spending time with relatives and neighbors and enjoying the sense of community. It’s a time to renew friendships, dismiss arguments, and reconcile differences from the previous year. While it is the Year of the Monkey, opportunities abound for all Chinese zodiac animals in 2016. If you’re interested in Chinese culture or traditional Chinese medicine, learn more about becoming a student in one of PCOM’s acupuncture, massage therapy or holistic nursing programs.

Good luck, and have a great Year of the Fire Monkey!