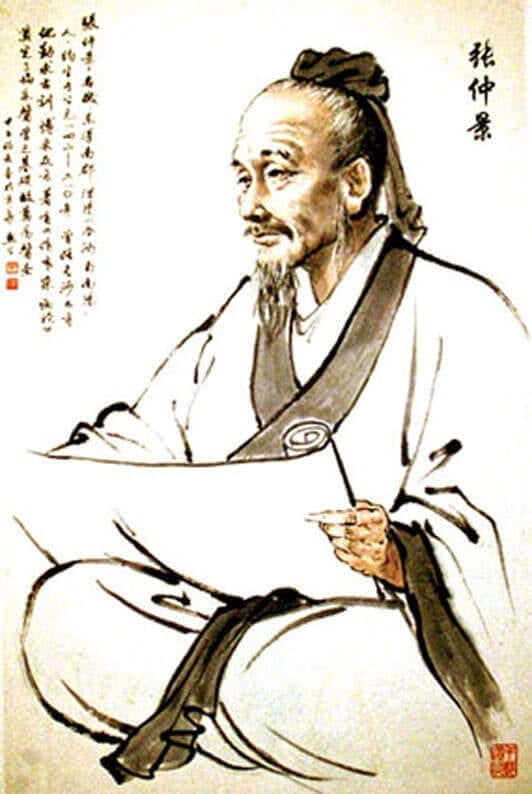 The classical Chinese medical system views health and disease through the “eight-principle and six-syndrome” differentiation methods. In ancient times, Chinese medical experts identified groups of symptoms as patterns, and associated them with specific formulas. Eventually, with repeated clinical success they recorded these patterns as “formula patterns”. Later, during the Eastern Han Dynasty between 40 to 200 AD, Zhang Zhongjing recorded all of this clinical experience handed down from generations in theShang Han Za Bing Lun (Treatise on Cold Damage and Miscellaneous Diseases), which was later edited and separated into the Shang Han Lun (Treatise on Cold Damage) and the Jin Gui Yao Lüe (Essentials from the Golden Cabinet). These classics illustrate the appropriate clinical application for a group of symptoms with a corresponding formula as well as suggest modifications according to the change of the disease. This medical legacy from Zhang Zhongjing is clearly a gem for Chinese medicine clinicians. The only two major issues we’ve had since then are maintaining these classics, keeping them intact while understanding them correctly and using them effectively in clinic.

To begin to understand the philosophy and clinical approach of classical thinking, we must open our minds to a different way of viewing health and diseases. In China, there is a clear difference between the Chinese medical practitioners that use the traditional Chinese medicine (TCM) zang fu approach in their practice, and the ones that use “pure”classical thinking. Both Dr. Hu Xi Shu and Professor Feng Shi Lun, like many other classical masters, have spent their lives researching and developing the understanding of the Shang Han Lun (Treatise on Cold Damage)and Jin Gui Yao Lüe(Essentials from the Golden Cabinet) and have been praised for clinical success.

Classical Chinese physicians who treat diseases according to classical thinking must identify which syndrome or syndromes have been affected by the pathogens within the “six-syndrome identification system”. Knowing the affected syndrome, or combination of syndromes, will lead directly to a group of classical formulas. Practitioners then need to identify the appropriate“formula pattern”, while making the necessary modifications to the ingredients and dosages according to the symptoms. 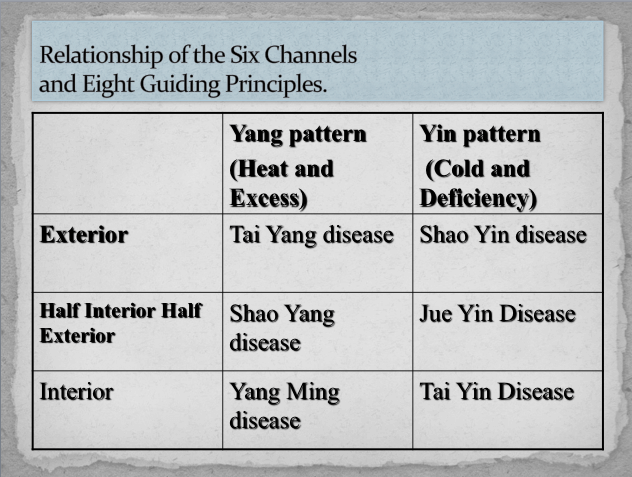 With this short summary of the six syndromes we can see that the symptoms of “fever”, or “hot sensation of the body” are often mentioned in theShang Han Lun (Treatise on Cold Damage),particularly in clauses pertaining to the external Tai yang syndromes, the internal Yang ming syndromes, and the half-exterior half-interior yang or yin syndromes. One cannot completely identify a syndrome by having only one symptom. It is the combination of symptoms that will demonstrate the full syndrome and show us the location of the pathogen in the body. Once the appropriate syndrome is identified, a practitioner will be guided to the pertinent group of formula patterns.

If the pathogen is located in the Tai yang syndrome, it is located on the external yang layer so we will need to promote sweating with formula patterns from either theMa Huang Tang (Ephedra Decoction) group formulas, or the Gui Zhi Tang (Cinnamon Twig Decoction) group formulas such as Ma Huang Tang(Ephedra Decoction), Da Qing Long Tang (Major Green Dragon Decoction), and Gui Zhi Tang (Cinnamon Twig Decoction). However, if the fever is caused by a pathogen located in the Yang Ming syndrome, it is due to an internal yang pattern and we will need to dredge and clear internal heat or promote vomiting, depending if the pathogen is located in the lower, middle, or upper Yang ming syndrome by using formulas such as Da Cheng Qi Tang (Major Purgative Decoction), Bai Hu Tang (White Tiger Decoction), and Gua Di San (Melon Stalk Powder). On the other hand, if we evaluate that the fever is related to a pathogen located in the half-exterior, half-interior yang layer of the Shao yang syndrome, then we will need to harmonize and clear the upper as well and warm the middle with formula patterns such as Xiao Chai Hu Tang (Minor Bupleurum Decoction), Huang Qin Tang (Scutellaria Decoction), and Jie Geng Tang (Platycodon Decoction). Lastly, if we have some heat sensation of the body in the upper with vertigo, hot flashes, dryness of the eyes and mouth, accompanied with severe cold sensation in the lower limbs and lower abdomen, this is related to the half-exterior half-interior layer of the Jue yin syndrome. Formula patterns to treat the Jue yin syndrome include Wu Mei wan (Mume Pill), Gan Cao Xie Xin tang (Licorice Heart-Draining Decoction), and Chai Hu Gui Zhi Gan Jiang Tang (Bupleurum, Cinnamon Twig, and Dried Ginger Decoction). 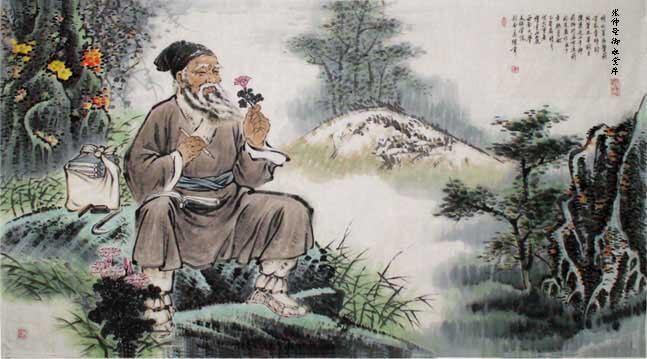 Formula patterns are the key to achieving clinical success with Jing Fang (Classical Formulas). Each of the formula patterns has been identified to treat one or multiple syndromes at once. However, these formula patterns have a very sensitive symbiosis and balance between each of the ingredients and their ratio. Any addition or subtraction results in a completely different formula pattern. In this sense, any changes made to the original formula deserve serious consideration.

Let’s observe a few case studies to fully understand the application of the Jing Fang approach to clinical practice.

The patient presented with fever between 39- 39.5 ℃which had lasted over 2 days and was increasingly worse by the hour, with sweating, low consciousness, no desire to speak, dry mouth, a desire to drink and only eat watermelon. His temperature that night at 7pm was 39.4℃with a greasy white tongue coating and a wiry and slippery pulse.

Results: The 1st dose was given at 8pm and the fever decreased to 38.8℃after one hour. The patient had no fever the next morning. Since there was a cough with scanty phlegm, Ban Xia Hou Po Tang (Pinellia and Officinal Magnolia Bark Decoction) Modified was given for two days. All symptoms resolved.

Analysis: The patient was administered Bai Hu Tang (White Tiger Decoction) since he suffered from the “4 bigs”: heat, fever, large pulse, thirst and sweating. In this case, Ren Shen(Radix et Rhizoma Ginseng) was added to support the function of the body in creating body fluid. After such excessive sweating, the patient had a severe fluid deficiency, which needed to be addressed. On the other hand, Cang Zhu (Rhizoma Atractylodis) was also added because of the greasy tongue coating and the inability to process fluids.

Note: The 10 year old patient was administered 100g of Sheng Shi Gao (Gypsum Fibrosum), which is well beyond the recommended dosage of 15g. The temperature of Sheng Shi Gao (Gypsum Fibrosum) is extremely cold and can affect the functions of the stomach. However, in this case, the boy was given one dose before he had a reaction and started sweating. One hour later the fever was already starting to decrease so the other dose was not administered.

The boy caught a cold and suffered from a fever for 10 days. He had taken antibiotics with no results. He now presented with symptoms of cough, sticky phlegm, wheezing, shortness of breath, abdominal fullness, loose stools, hot sensation of the hands and feet, a white and greasy tongue coating, and a wiry and rapid pulse.

Results: The decoction was prepared once and separated in two portions. After taking the 1st portion, the patient experienced some sweating and the fever decreased. The cough reduced and the shortness of breath and abdominal fullness resolved. Since the patient had a cough with scanty phlegm, Ban Xia Hou Po Tang Modified was given for two days and all symptoms resolved.

Analysis: In this case, we notice that the amount of Chai Hu (Radix Bupleuri) is double the traditional amount due to the high fever. Giving the lower dosage of Chai Hu would be less effective in cases of high fever.

When it comes to treating children, the syndromes are usually acute and their symptoms change very quickly, so it’s often appropriate to give one day of decoction taken over the course of two days while paying close attention to the changes in the symptoms. Once the symptoms change, we need to change the formula.

Classical medicine and Chinese medicine often have a reputation for successfully treating chronic diseases. But as we see clearly in this case, results can be achieved in one dose with the appropriate diagnosis and the correct formula pattern. Correctly applying the wisdom of the classical medicine is a refined skill that is not only fascinating, but extremely effective.

Dr. Suzanne Robidoux PhD, CM, DOM, LAc, is an international speaker and author presently conducting a clinical trial at the Beijing University of Chinese Medicine on the application of classical thinking from the ancient doctor Zhang Zhong Jing, according to the six syndromes differentiation. She is also the founder of an online platform to link foreign practitioners to masters in China.