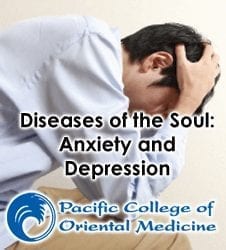 When treating anxiety and depression, I would describe Five Element or Five Phases theory as both a context and a lens, applied with intent to diagnose and treat a patient. “Five elements” and “five phases” are terms that have been used interchangeably, with slightly different meanings. “Five elements” describes five compository forces occurring in Nature, namely, earth, wood, metal, water and fire. Some scholars prefer to use the term “phases” rather than “elements,” in order to convey the morphing and co-affecting properties of the elements, and avoid portraying them as being static. Five phases is essentially an ancient Chinese scientific theory describing a system of order and patterned movements inherent to nature. It describes the composition of Nature, forces within it that interact to produce specific results, and, in a medical context, provides a healthy standard by which to measure an individual. The individual, inseparable from Nature and a microcosm of Nature, contains the same elements as Nature. In a state of health, it is expected that the elements within a person will behave in the ordered manner in which they operate in Nature. These elements and phases provide a view into treating anxiety and depression.

The crux of this theory is that the human individual exists within the context of the natural world, and that illness in the individual arises from disorder. One might rightly ask, how does an individual inseparable from nature manifest disorder from within the context of nature? The sources of illness named in this ancient medical theory give us further insight into a philosophical and scientific perspective of the individual as being equivalent to his/her context. What is a human being? A human is at once natural, personal, and social. Interestingly, the sources of illness in this ancient medical theory are natural, personal and societal. 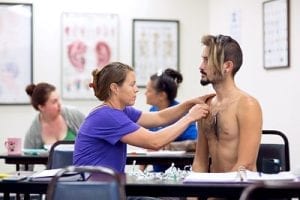 One could depart from a natural state of being through disorderly social conduct, indulging personal emotions, or from onslaught by external pathogenic factors. Wind, water, damp, cold, and heat were forces observed in nature that could, in excess, harass the individual. Strength against pathogenic factors, either internal or external, was believed to arise from a state of piety. Concepts of spiritual correctness (zheng qi), personal integrity (zhi), and harmony with the unfolding of the present moment as it is (Tao) arose from a soup of Confucist, Taoist, and Buddhist philosophy, all of which espoused ideas on the right relationship between an individual and society within the context of the natural world. There continue to be many interpretations of five phases and five elements theory, expressing these core ideas. What delights practitioners of Traditional Chinese Medicine is the opportunity to consider a patient within the full context as a natural, personal and social organism.

Acupuncture for Treating Anxiety and Depression

Dr. Leon Hammer is one of the significant contributors to the five-phases style of Traditional Chinese Medicine. He was seminal in teaching five phases philosophy to Western students, and a number of next-generation teachers have branched out from that material and continued this vein of theory and practice. Lonny Jarrett is one of them. The body of published material in the five element style of practice, which seeks to consider the more subtle psycho-spiritual-emotional dimensions of humanity, continues to grow as a side-vein to other systems of TCM that focus more on internal medicine and physical illness. There will always be a small percentage of students coming through the system who are interested in specializing in the spiritual-emotional aspect, in effect, the psychotherapeutics of acupuncture. Five phases theory provides a strong context for consideration of the patient as a spiritual, emotional and social being, as well as a natural one. This enables the practitioner to treat anxiety and depression along with the more subtle emotional-mental-spiritual bodies of the patient, as well as the animal body. In effect, the material body is seen as a gateway to the subtle bodies, and the acupuncture meridians and points linked to the organ systems can be used to access the emotional, mental and spiritual aspects of the patient.

For this reason, in Traditional Chinese Medicine, anxiety and depression have a variety of root causes, centered in physiological areas other than just the brain. The language of Chinese medicine sounds wildly foreign to westerners, but is perfectly logical and highly sophisticated within its context. For example, within the context of TCM, there are five potential causes of anxiety: heart qi deficiency, heart blood deficiency, spleen and kidney deficiency leading to retention of harmful fluids, and phlegm-fire. In essence, there are a number of organs in the body whose physiological function can drop due to external or internal stressors, leading to pathologies that give rise to not only physical symptoms, but psychological symptoms as well. In Western medicine, most of these symptoms would appear unrelated, whereas in Chinese medicine, complex maps of physiological, emotional and mental symptoms have been detailed.

In the Five Phases system of Chinese Medicine, the emphasis on psychotherapeutics is even further developed. While TCM maps out the physiological factors attributing to anxiety, Five Phases examines the personal experiential aspects of anxiety. Like Western psychotherapy, Five Phases examines the role of early life experiences during the developmental years. There is an entire branch of Western medicine devoted to the understanding of the body-mind complex and the involvement of the brain and nervous system in processing experiences. Trauma research attempts to understand how intense life experiences can remain with the individual causing emotional pain and a lack of personal growth. The Five Phases branch of Traditional Chinese Medicine is equivalent. In this branch of TCM, acupuncture is used as a bridge between the physical and psychological aspects of the human body, in order to assist the mind-nervous system complex in processing traumatic experiences and break patterns of emotional distress such as PTSD, anxiety and depression. While this seems far-reaching, the maps Traditional Chinese doctors developed intersecting the organ systems with emotional and mental functions are invaluable to treating anxiety and depression in patients.

Roots of Anxiety and Depressive Disorders in Early Stages of Development

In his book Dragon Rises, Red Bird Flies, Dr. Hammer discusses the roots of anxiety and depressive disorders in relation to a series of natural phases of development from conception through the early teenage years. In summary, the human individual goes through a series of distinct phases of development from cellular mitosis through to the development of oneself as a social individual within the context of society. The theory extrapolated in his book is that a significant interruption in the logical progression through the developmental phases, whether genetic or traumatic in nature, will result in anxiety and depressive disorders in the individual during adult life. A brief except from his explanation follows. Considering anxiety as a perceived threat to one’s “becoming” when attempting to enter a new stage of life, Dr. Hammer subcategorized the diagnosis of anxiety into seven general types:

“Fear of the unknown” and “separation anxiety” are trepidations that arise when the individual attempts to step out into new territory, or finds himself alone in relationship. This type of anxiety is created when there is a significant interruption in the earliest phases of life, from conception, mitosis, incubation, birth, and so on, through early stages of development as a child individual. “Pretense” and “suppressed excitement” are related to environments during the developmental years when a child was required to suppress aspects of their psyche or emotional experience in order to appease their caregivers. “Anxiety as a comforting emotion” and “anxiety as a magical device” refer to the condition wherein a state of anxiety is normalized as either intrinsic to the concept of “mother” or as a ward-off to bad things actually happening in life. “Guilt” is a perversion of an expression of spiritual wonder, wherein the individual punishes herself mentally in order to appease the imagined wrath of an internalized God-concept. This is just a brief example of the ways in which Dr. Hammer categorizes anxiety disorders by linking them with developmental phases in treating anxiety and depression. His book goes into great detail to elucidate the specific tones of anxiety and depressive disorders as well as how to diagnose phases in the taking of the pulse, corresponding with the TCM maps of emotional and physiological organ function.

Dr. Hammer maintains that what is seen clinically in the practice of psychotherapeutic medicine is interference in early-life development that returns as obstacles in adult life which the individual cannot overcome; the individual responds to the obstacles by experiencing anxiety or depression. Therefore, treatment of anxiety and depression could utilize maps of the intersection between physiological function and emotional development, using acupuncture points related to the stages of development of the physical body in order to treat disorders of a psychological nature.