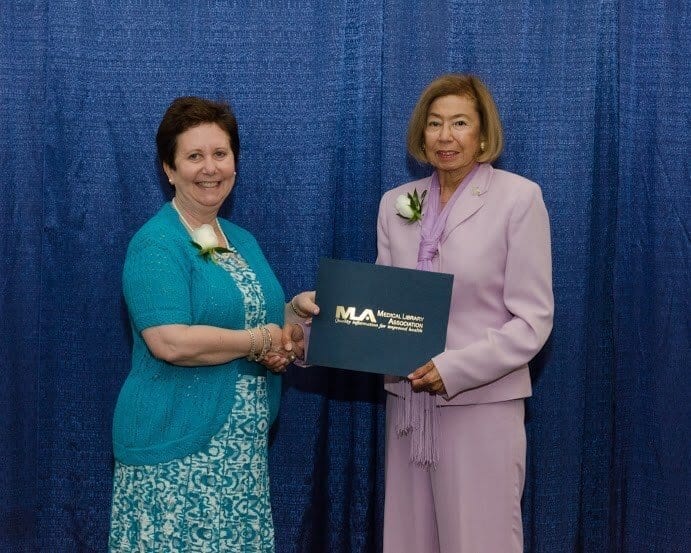 On May 18, 2015, Naomi C. Broering, PCOM’s Dean of Libraries, received the Medical Library Association’s (MLA) first Hispanic heritage award at the annual MLA conference in Austin, Texas. Named the Naomi C. Broering Hispanic Heritage Award, the award honors and recognizes her past accomplishments in medical librarianship and library informatics. Naomi has a long interest in medical informatics and knowledge management, having been the first recipient of the National Library of Medicine’s Integrated Advanced Information Management Systems grant to integrate information.

In celebration of her more than 45 years as a member of the MLA, Naomi and her husband, Gregory A. Chauncey, endowed the award as a grant. Hereafter, the Broering Hispanic Heritage Grant will award $1,000 annually to a person of Hispanic or Latino ethnicity who wants to pursue a professional development/research activity in the areas of medical informatics and/or data management, to encourage librarians to gain knowledge about these important areas of practice and support MLA’s emphasis on evolving roles for the profession.

Naomi, who is approaching her fifteenth year as Dean of Libraries at Pacific College of Oriental Medicine, teaches information literacy classes to PCOM masters and doctoral students in addition to managing a vibrant, digital, high-tech library. In addition to managing the San Diego campus library, she coordinates the New York and Chicago campus libraries and maintains the library webpage, online tutorials, and digital resources.

Naomi is a distinguished Fellow of MLA and the American College of Medical Informatics. She served as Chair of the MLA Consumer Health Section in 2007-8, is active in the MLA Complementary Medicine Section, and has received the Frank Bradway Rogers information advancement award, the Special Libraries Association (SLA) Winifred Sewell award, and the SLA Professional award. In 2003, Naomi received the Marsha Noyes Lifetime Achievement Award, the highest honor given by the MLA. She served as President of the MLA, the first known president of Hispanic lineage, in 1997, and in 1995, received Georgetown University’s Distinguished Service Vicennial award.

Naomi, PCOM’s Dean of Libraries, graduated cum laude with a BA from California State University Long Beach in 1960. She earned an MA in History in 1963 and an MLS in Library Information Science from UCLA, completed in 1966. As a Doctoral candidate at UCLA, she completed all her PhD course work in History in 1965. She was an NIH Postgrad Fellow of the National Library of Medicine (NLM) in 1967 and earned a Government Management Certificate at George Washington University (CGS) in 1973. Naomi is also a founding member of the Friends of NLM, and the first librarian to be a Board of Directors officer. 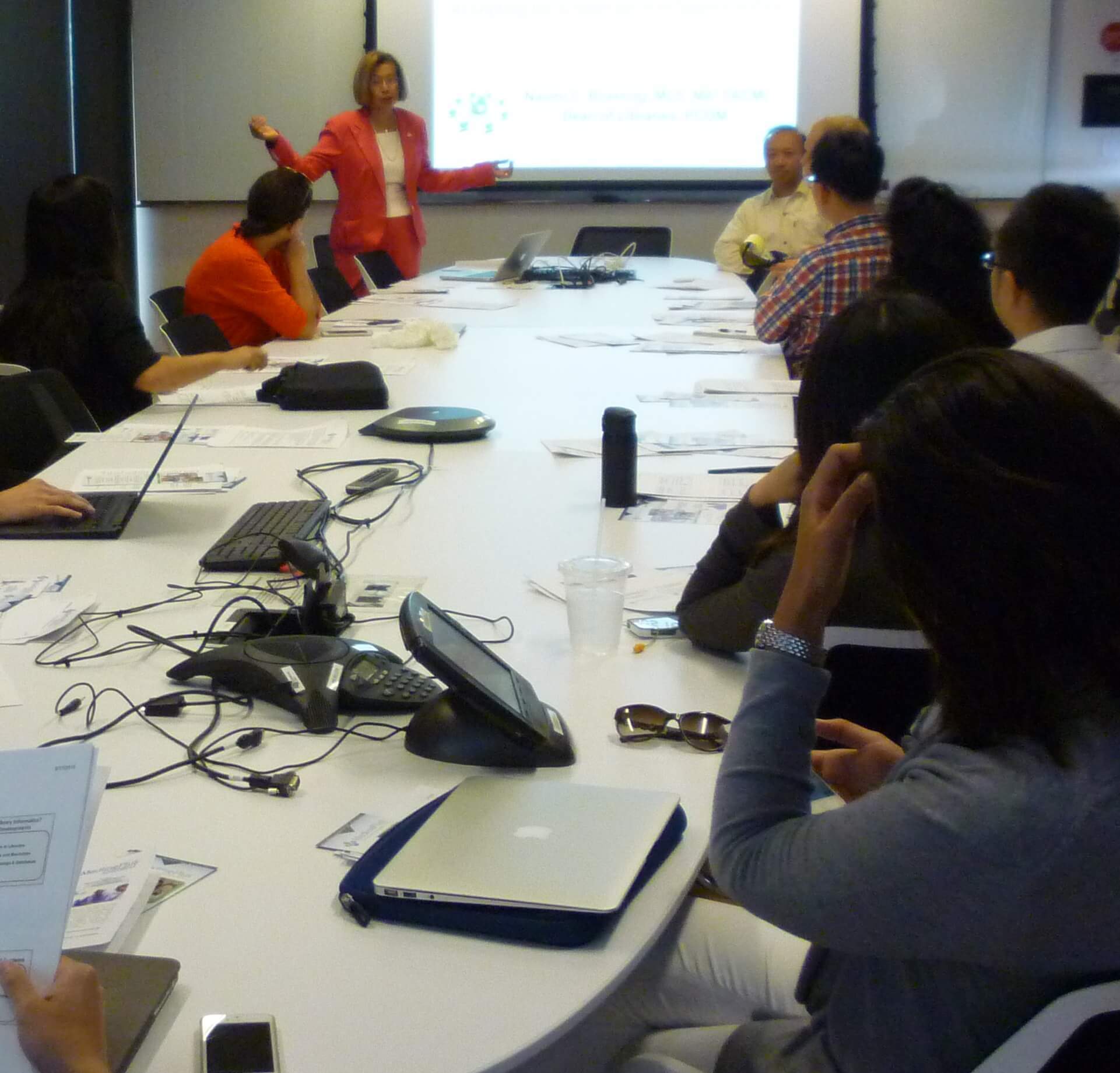 Prior to joining PCOM, Naomi was Director of the distinguished Georgetown University Medical Center Library and Executive Director of the Houston Academy of Medicine Texas Medical Center Library, the second largest medical library in the country. She moved to San Diego in 1999 to retire, but decided she wanted to continue her professional work, joining PCOM in 2001 as a part-time librarian and becoming Dean in 2003.

Naomi is a prolific writer and grant developer. She has written over 200 journal articles and over 20 grants. Since 2003, she has collaborated with Gregory Chauncey on nine government contract awards for PCOM from the NLM to provide Health Information Literacy Outreach Services. Recent NLM projects include Disaster Health Information, Emergency Preparedness, HIV AIDS Services, and Promoting MedlinePlus Connect in San Diego. In April 2015, Naomi was invited by the University of California San Diego’s Biomedical Informatics Department Chair to present a Distinguished Lecture on “Big Data Fusion of Biomedical and Library Informatics for Patient Care” to their faculty and post-doctoral fellows.