Home › Moxibustion and Other TCM Alternatives for Hormone Replacement Therapy 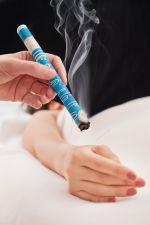 Today, there are several alternatives for hormone replacement therapy. Traditional Chinese medicine (TCM) is based on the theory that there are channels throughout the body. Flowing through these channels, known as “meridians” is a person’s vital energy, known as “qi”. When you think of traditional Chinese medicine, acupuncture is probably what first comes to mind. For those that are unfamiliar with this ancient practice, acupuncture is the application of small, disposable (and ultra-thin) needles into the skin at strategic points, known as “acupoints”, along the meridians where energy is thought to be blocked, based on a person’s ailment.

While acupuncture is the most well-known modality of traditional Chinese medicine, closely followed by Chinese herbology and massage (known as Asian bodywork), Moxibustion therapy, or moxa treatment, is another highly effective Oriental medicine therapy. Moxibustion involves burning moxa (mugwort herb) near or on the skin, particularly at acupoints. This treatment is designed to strengthen and stimulate blood flow and qi. This process is typically used to treat diseases, provide pain relief, expel colds, and upkeep health in general. However, there has been a recent upsurge in patients seeking moxa treatment for one ailment in particular—menopause and its side effects.

Hot flashes, mood swings, irregular periods, night sweats, and nutritional deficiencies are premium symptoms of menopause. One of the most common Western treatment plans for the discomforts of menopause is hormone replacement therapy, known as HRT. Hormone replacement therapy involves the administration of estrogen and progestin, a synthetic form of progesterone. Recent news has surfaced that causes concern regarding HRT and its long term effects. Women using HRT showed increased risk for breast cancer, heart disease, stroke, and blood clots. Holistic, all natural treatments such as acupuncture and moxa are effective alternatives to hormone replacement that have no side effects.

Chinese herbology is another remedy for menopausal symptoms. Black cohosh, for example, is an effective natural remedy for menopause that helps with a variety of symptoms including hot flashes, heart palpitations, and headaches. Additionally, St. John’s Wort can treat mild forms of depression and anxiety. Because herbs can regulate the levels of all three essential hormones in the female body – estrogen, progestin, and testosterone – herbal remedies have had positive results when treating menopausal symptoms.

Non-estrogenic herbs in particular are more commonly being used as an alternative to HRT. Herbs that can treat hormonal problems without introducing artificial hormones into the body are referred to as “non-estrogenic.” The use of non-estrogenic herbs is widespread in countries such as France, Japan, and Germany, and doctors often prescribe these herbs as remedies for menopausal symptoms specifically.

Each woman is different, and the intensity and range of each patient’s menopausal symptoms vary greatly. Unlike many Western treatments, TCM develops each treatment plan individually for the patient. There is no one-size-fits-all in Chinese medicine. A TCM practitioner can help a woman suffering from menopause by devising a treatment plan that’s right for her—and the treatment may combine moxa, acupuncture, herbology, and even massage. And the best part is—there are no side effects.