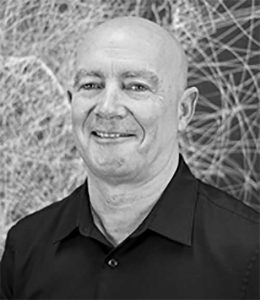 High amounts of screen time cause the body to give us vision—and quite often posture-related—feedback clues. It can also impact thinking and mood. Let’s focus on the visual system, because clues in this area are (1) a common type of feedback, and (2) an indication of visual system stress. Postural complaints, like neck stiffness and back aches, are partly to mostly a result of ergonomics, or postural discomfort, while looking at screens rather than the mere fact that we were looking at them. Cognitive and mood complaints can be clues that the eye strain stress is exhausting the eyes and the brain.

Almost immediately after computer VDTs entered the workforce in the 1970s, the workers using this new technology began to have a cluster of similar complaints. Today the group of complaints are categorized as “eye strain”. The exact way any individual experiences eye strain can vary, but a person will have one, and quite commonly many of the following complaints:

Some people have eye strain and are aware of it, but many others are either unaware—or pseudo-aware, meaning that they fall somewhere between not making the connection between their screen time behaviors and how their eyes are feeling and performing, to realizing screens may be affecting their eyes but not realizing how much. This unawareness or pseudo-awareness is because the digital eye strain complaint(s) can seem relatively minor, be confusing as to what’s causing them, can come and go (i.e., be transient as opposed to constant), or change over time.

Watery eyes, as an example, may mean that we are reacting to an allergen in the environment, so it’s not always obvious the cause is screen time behaviors. While some people experience watery eyes, others experience its opposite, dry eyes. Of the two, watery eyes might be an early phase of an attempt at adaptation to screen time, with the eyes trying to soothe themselves to replace blinking (we typically blink less when looking at screens). But adaptation can run out, with many people experiencing the opposite feedback—dryer eyes—as the glands that are responsible for secreting oil into our tears eventually produce poor quality or inadequate amounts of the oils that slow the evaporation of tears.

The blurry vision from screen time can be very similar to blurry vision caused by refractive errors (i.e., nearsightedness as an example). The blurred vision could be constant; it could also be intermittent, making it easier to ignore or harder to pinpoint the reason for it. While it’s not unusual for blurred vision, especially at a distance, to be worse post spending hours on a screen, it’s easy to not make the connection between our recent screen time behaviors and eye performance.

It’s difficult for many adults to make the connection between how their eyes perform and their screen time behaviors; it’s even less likely teens and children will make the connection. If you are a parent, keep in mind that children of all ages, even teenagers, may be less likely than adults to figure out there’s a relationship between how their eyes are feeling and the time they are spending on devices with screens.

If nothing is done to address eye strain complaints early, they are almost certainly going to continue—assuming our screen time behaviors don’t change substantially—and very frequently worsen with ongoing screen usage (the number of years of screen time is a very strong predictor of eye strain). Stress accumulates and the future price is usually higher than today’s, so it’s important to understand how screens are affecting your eyes today.*

Before going any further, take a few moments to rate (e.g., Not At All, Slightly, Moderately, Severely, Very Severely) how you experienced the complaints listed below during the past week. We’ve put numbers under each of these ratings, to give them a score. Once you’ve rated each complaint, add up the numbers, to get your total score. Higher scores suggest more severe screen time eye stress. 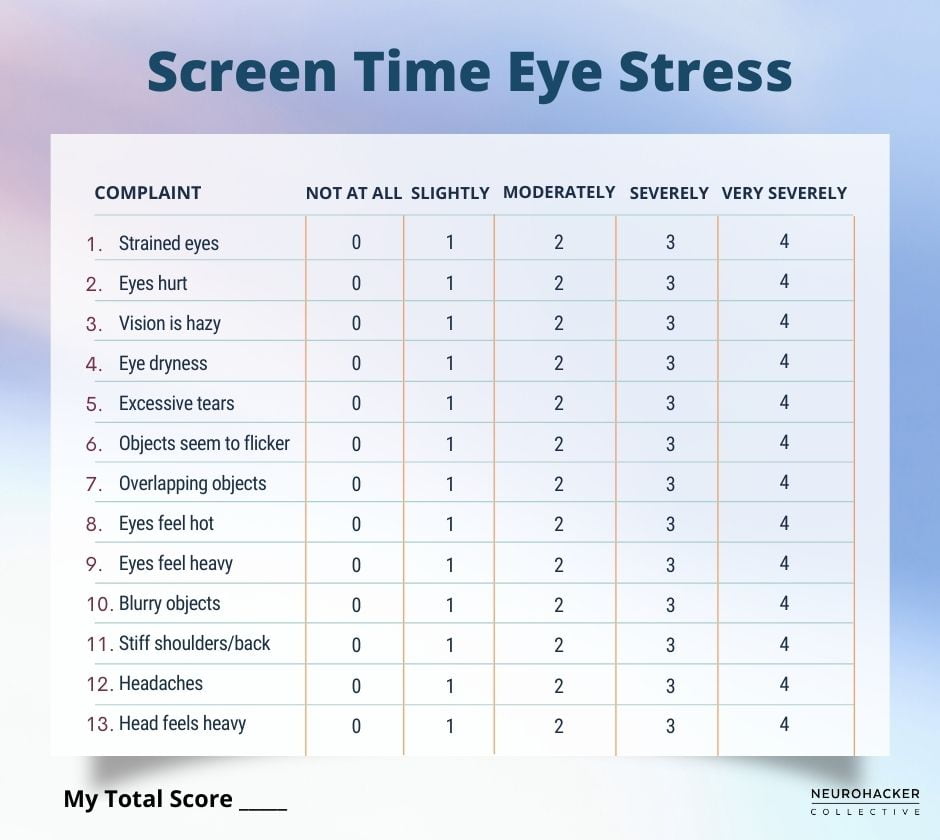 If you had a score of more than a few points, you are like the majority of people surveyed: in January 2021, Neurohacker Collective had close to 700 people rate these complaints. The average score for all participants surveyed was about 16 points. Almost 80% of the participants had scores of 10 points or higher: Three out of 10 had scores of 20 or higher. This was not a surprise. Screen time behaviors for more and more people continue to increase. No wonder more and more people are experiencing multiple eye stress complaints that are causing them significant amounts of visual system discomfort.

Screen time can take a toll on anyone’s eyes, ranging from fatigue and strain to dryness and blurry vision. But the exact way eye stress is experienced can vary individually. Eye strain symptoms are often grouped into two main categories—internal (double vision, blurred vision, difficulty refocusing) and external (dryness, excessive tearing, burning, itching). The internal complaints have a lot to do with focusing the eye at about the same distance for hour after hour, which requires ocular and lens muscles to work overtime. The external symptoms are related to stress on the outer surface of the eyes and occur because ocular surface eye protective mechanisms are, in a sense, getting exhausted. Feelings of eyes being tired, sore, or achy don’t fit neatly into either group; they may be more whole eye symptoms. While the toll taken can vary somewhat, in most people, screen time behaviors place stress on all of the eye, from the ocular surface all the way to the retina.*

Eye strain can linger after we’ve turned off the screen, impacting our ability to perform other visual activities after prolonged screen time. It can also stress cognitive performance and mood. This should not be surprising. As neuroscientist Andrew D. Huberman, the head of the Huberman Lab at the Stanford School of Medicine, said when interviewed by Dave Asprey on Bulletproof radio, “The eyes are fundamentally the most powerful driver of what we think, what we feel, and ultimately what we can do, because they set the basic level of alertness or sleepiness.”

The eyes are not just two external things connected to the brain; in a very real sense, they are the brain. The retina and optic nerve are, anatomically speaking, part of the brain, and the eye is part of the forebrain during embryological development—essentially birthed by neurological tissue. As we grow from infants to adults, it’s the combination of the maturation of the eye working with the brain that creates perception, the ability to see well and perform perceptual cognitive tasks.

Not only is the eye-brain an integrated whole, but sighted humans are primarily visual creatures. For most of us, vision is the dominant sense used to interact with the external world. Because of this, visual processes occupy the largest amount of real estate in the cerebral cortex—this is the area of the brain that, among other things, receives and processes sensory information—with 20–30% of the cortex devoted to vision. As much as half of the human brain may be involved, directly or indirectly, in visual processing according to research conducted in the mid-1990’s by scientists at the Massachusetts Institute of Technology (MIT). So, quite a bit of brain real estate and processing power is used for vision. This means that, when the eyes are open, a large amount of the electrical activity of the brain will be involved in seeing.

Brain electrical activity is a type of work, and like all work, it takes energy. Vision-related activities use quite a bit of metabolic energy. Compared to dark or dim conditions, the amount of energy used by the visual cortex can increase more than 50% as the amount or richness of visual information increases significantly. Thinking and mood are brain functions that require work; they compete for metabolic energy with other cognitive demands. If we are placing more demands on the visual system—which screen time does—it makes sense that other brain work may be short-changed when it comes to brain energy, and, as a result, have performance impacted. For many people, this seems to be exactly what occurs: anecdotally, for example, it’s common for people who spend lots of time looking at screens to feel irritable, nervous, agitated, fatigued, or some combination of all of these, as a work or school day progresses and screen time has accumulated.

Spending lots of time looking at screens can negatively impact cognitive performance, especially in areas related to productivity, attention, concentration, and working memory. Even when comparing a seemingly identical type of visual work, reading text, as an example, screens and paper copy don’t produce identical performance results. Several dozen studies have reported that students of all ages, from elementary school to college, tend to absorb more when they’re reading on paper than on screens, particularly when it comes to nonfiction material. It’s thought that some of the difference in reading performance may be related to screens producing a greater workload and consuming more mental resources, which stresses the brain’s finite energy resources and information processing capacity.

Screen time behaviors stress the eyes; they also seem to stress the brain. How we are using our eyes can and does impact how the eyes feel and function, as well as how we perform mentally and emotionally.

*These statements have not been evaluated by the Food and Drug Administration. This product is not intended to diagnose, treat, cure, or prevent any disease.

Gregory Kelly, ND, is the Director of Product Development at Neurohacker Collective. He is also the author of Shape Shift and many other articles, and a speaker in areas related to nootropics, biohacking, anti-aging, sleep, stress, weight management, exercise, and brain performance. He has been a guest on health and biohacking podcasts including Kwik Brain with Jim Kwik; Fat-Burning Man with Abel James; and Super Human Radio with Carl Lanore.