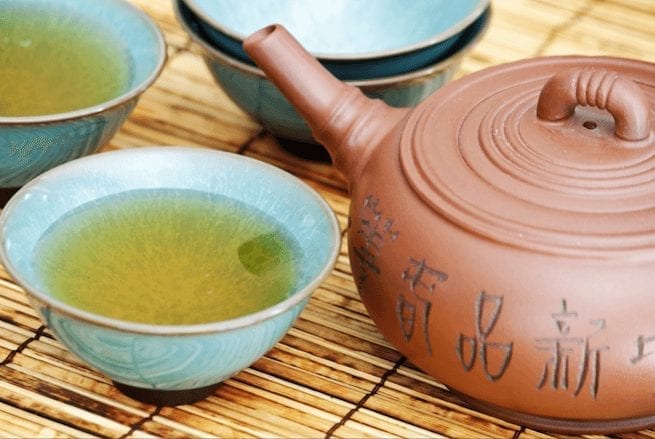 Type 2 diabetes is a degenerative disease in which the body becomes less efficient at absorbing and utilizing glucose.  It is different than Type 1 diabetes because it is acquired as the body’s cells become less and less receptive to insulin—the shuttle that delivers glucose to be burned and stored in cells—whereas type 1 is present at birth. Elevated production of insulin is a sign of diabetes in its gestation period.  Insulin is the aging hormone, like oxygen its presence is needed in the body for metabolism, but resistance linked over production results in what appears to be rapid aging. It only seems natural that as Western medicine confronts this epidemic it would turn to one of nature’s most renowned anti-aging botanicals, green tea.

Diabetes is a highly complex disorder that, while it can be partially attributed to genetic proclivities, depends primarily on lifestyle choices.  An unbalanced diet high in sugar and nutritionally inferior processed foods (which are full of sugar) and a sedentary life are two of the most common contributing factors leading to the development of diabetes.

In response to the metabolizing of sugar, the pancreas secretes the enzyme insulin along with other pancreatic digestive juices to transport glucose into individual cells throughout the body to be burned (body heat). Insulin is needed because with the exception of the brain and liver most organs and tissue cannot absorb glucose on their own.  In the process water and carbon dioxide are created, but the cell is also capable of trapping energy through a chemical process. This energy is a reserve. When blood sugar volumes spike, as they do after eating, say, a candy bar, the pancreas must secrete an ample amount of insulin to “shuttle” the glucose into cells—glucose is a sticky and gummy substance that can do damage to arteries when it reacts adversely to other chemicals in the bloodstream or clings to proteins and fats. As the brain, liver, and muscles cells fill up on glucose, insulin has no other choice but to force excess glucose in the blood into fat cells for storage as a means to protect the body, hence the correlation between obesity and diabetes.

Periodic elevated levels of insulin are natural and necessary to assimilate glucose energy from food to be used for growth and repair, but because of the nature of the insulin hormone, cells become less and less responsive to it as a transporter as more of it is present.  Age and insulin resistance are synonymous with each other. As the body becomes less efficient at metabolizing lipids and amino acids, a whole host of problems begin to arise. A high sugar diet increases the rate at which your body becomes resistant to insulin, among other things. In the gestation period of diabetes, patients’ blood insulin levels are often elevated. In severe cases, a state of starvation has been observed, where patients are so resistant to insulin they can eat but not receive any energy to process nutrients or maintain biological function. Without nutrition, the body dies.

Green tea has been shown to inhibit the enzyme amylase, which is produced and secreted by the salivary glands and pancreas for the digestion of starches. This slows the rate at which the sugar contained in starches is metabolized and released into the bloodstream. Less insulin is required to shuttle glucose because there is less glucose in the blood, thus insulin resistance is curbed.  Drinking liquids also creates a feeling of satiety. Green tea adds to this by relaxing the muscles of the stomach and intestines, slowing the physical movement of food, and subsequently mimicking calorie restriction or fasting. Green tea has also demonstrated the ability to prevent metabolism and absorption of triglycerides through the digestive tract. These are the fatty substances that accumulate as adipose tissue (unsightly fat) clogs arteries and, like cholesterol, can react adversely with oxygen in the bloodstream. Components of green tea act as fat grabbers, passing undesirable fats through the digestive tract and out the colon.

Exercise is also an important factor for diabetics, as it increases muscle sensitivity to insulin and burns fat resulting from poor assimilation of glucose. Exercise also lowers the level of fasting or stored amounts of glucose. Small amounts of caffeine have shown to increase the rate of fat metabolism, and tea contains caffeine, though in lower doses than coffee. It should also be noted here that the body will not metabolize lipids and amino acids when insulin is present, as it disables this function of the liver. Glucagon, another enzyme produced by the pancreas, is needed by the liver to convert amino acids found in protein and fat into glucose to be burned immediately. Problems associated with obesity often apply to diabetics, who more rapidly accumulate fat because of high insulin levels. They are short on energy because their body cannot metabolize amino acids and lipids as an energy source in the presence of insulin, so they turn to sugary foods, which supply a small boost but also increase insulin production and fat storage–so the cycle continues. It is thought that green tea may also play a role in the delivery of glucose to muscle cells, thereby decreasing the overall need for insulin in the body.  It seems that by imitating certain hormones in the body, chemicals found in green tea mollify the harsh effects of the body’s catabolic processes that lead to age-related disease.

Additionally, anti-oxidants found in green tea scavenge the free radicals created from metabolic function as well as respiration. These free radicals react with oxygen and other air traveling molecules and toxins, causing cell damage and permutations of the DNA structure that lead to cancer, heart disease, and organ failure. These same anti-oxidants inhibit the free radicals that are released when existing body fat is utilized for energy.

Diabetics are often subject to high blood pressure and nervous disorders because of the state of hormonal imbalance.  The anti-oxidant polyphenols in green tea deactivate the free radicals that react with LDL cholesterols in the bloodstream that can contribute to atherosclerosis, heart attack, and stroke. Because of green tea’s ability to stimulate metabolism, improve circulation (intercellular exchange), and boost the immune system, it leaves more energy and blood for use by the brain. Tea has been noted for centuries for its stimulating but paradoxically relaxing effects on the mind and body. Lowered levels of stress, be they internal or external, are highly important for diabetics to maintain, as their physiological system is already under enough strain. Stress triggers the release of adrenaline which raises blood sugar. Green tea also protects brain cells and neurons from damage caused by lipid peroxidation in the nervous system and oxidation of glucose.

Green tea is by no means a cure for diabetes, but it is a natural gift for restoring balance in the human system and removing unwanted toxins accumulated from the internalizing of the environment.